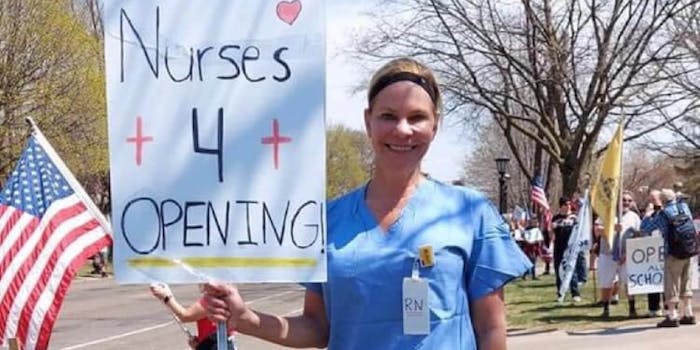 'You have to be a special kind of evil person to masquerade as a nurse to lobby to get them killed.'

Protests continue around the nation as people demand that businesses and schools be allowed to reopen without restriction. Proponents say small businesses are suffering and need to reopen to avoid going under. Detractors claim that these are really just customers who want to force Applebee’s to open so they can grab an appetizer or billionaires who want their employees to go back to work.

Now, a photo making the rounds on social media is lending credibility to the idea that maybe these protests shouldn’t be taken at face value.

The picture shows a woman dressed in scrubs and carrying a sign that says “Nurses 4 Opening.” There’s no question that she wants to represent the idea that even nurses, many of whom are faced with the horrors brought about by COVID-19 infections every day, are in favor of the country getting back to business as usual.

But one eagle-eyed Twitter user spotted something throwing this lady’s game into question: a blatantly handmade badge that just has “RN” (registered nurse) written in sharpie.

The ridiculousness of the whole thing caught the internet’s attention right away, and it wasn’t long before people began piling on.

“Of course, all the nurses who attended me in hospital had badges with ‘RN’ written on them in sharpie,” quipped @Zoe_of_Elyon.

And some noticed a few more details that called this lady’s proclaimed identity into question.

“That top is brand new and still has the folds from where it sat in the shelf,” pointed out @BrianPC_.

But most people were just shocked at the pure audacity this woman has to not only pretend to be a nurse but to advocate for making their lives even harder.

“You have to be a special kind of evil person to masquerade as a nurse to lobby to get them killed,” wrote @Sailboatstudios.

Many of those outraged at the photo are blaming the Republican party, specifically the chairwoman of the Arizona Republican Party, Kelli Ward, for encouraging this kind of trickery.

“Planning protest to #ReOpenAmerica? EVERYONE wear scrubs & masks – the media doesn’t care if you are really in healthcare or not – it’s the ‘message’ that matters!” she wrote on Twitter at the end of April.

If you’re going to pretend to be someone else to gain credibility at a protest, at least put some real effort into it. But better yet, just don’t do it at all.