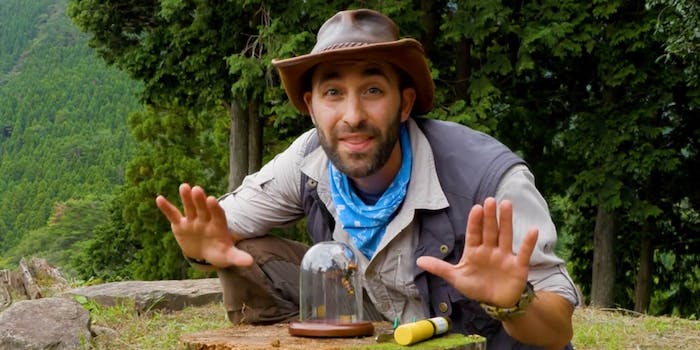 This YouTuber let a murder hornet sting him

News of the “murder hornets” arrival in the U.S. served as inspiration for a slew of memes online. However, YouTuber Coyote Peterson featured himself being stung by one in a video long before the hype, a year-and-a-half ago.

Asian giant hornets are Japanese natives and pose a significant risk to honeybees as predatory insects. They have strong mouthparts that let them decapitate bees and feed their young with the bodies. According to the New York Times, the Asian giant hornet is responsible for up to 50 deaths each year in Japan.

In the video, Coyote Peterson shared the experience of being stung by one on his channel, Brave Wilderness, in which he shares information about different types of animals.

“Searing pain. Absolute searing pain,” he screams upon being stung.

Peterson included a warning, urging viewers not to attempt to recreate the video.

In the past, he’s also shown off turtles, lizards, sharks, and other “extreme” animals. Peterson is also the host of Coyote Peterson: Brave The Wild on Animal Planet.

The 18-minute video of Peterson getting stung was intended to educate their audience about the hornets. It was posted in November 2018, long before the so-called murder hornets made their way to the U.S.