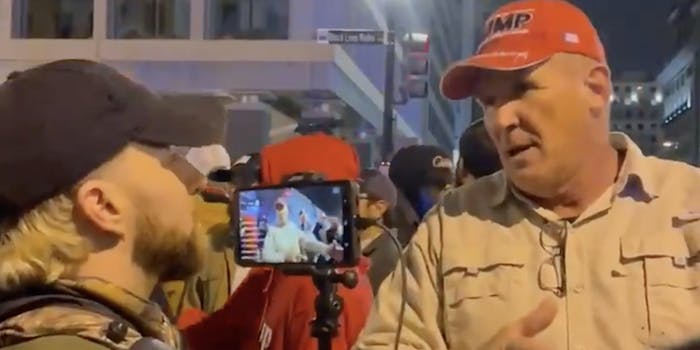 The Capitol riot is fracturing Trump’s fan base, as Baked Alaska and the Gateway Pundit go to war

The conspiracy blog suggested that the white nationalist could be a fed.

Anthime Joseph “Tim” Gionet, the white nationalist known online as Baked Alaska, has gone to war with the Gateway Pundit after the conspiratorial blog appeared to suggest that he could be working for the federal government.

In an article on Wednesday, Jim Hoft, the founder and editor-in-chief of the far-right outlet, attempted to outline what he described as “curious” behavior by Gionet during and prior to the Capitol riot on Jan. 6.

Supporters of former President Donald Trump have continually attempted to shift the blame for the failed insurrection on an ever-evolving list of enemies from antifa and the FBI to individuals such as Gionet.

After citing Gionet’s history—which includes his employment at BuzzFeed, his later work with provocateur Milo Yiannopoulos, and his eventual involvement in the notorious white supremacist tiki-torch march in Charlottesville—Hoft points to footage of Gionet in the nation’s capital one day before the riot.

The video shows Gionet alongside Ray Epps, a man who has also been accused of working for the federal government after being filmed repeatedly suggesting that protesters enter the Capitol building.

“Let’s go!” Gionet shouts in response with a smile.

The article does, however, exclude other videos in which Gionet can be heard accusing Epps of working for the federal government due to his provocative statements.

Despite no actual concrete evidence that Epps has ties to the federal government, and numerous scenarios that could explain why he is not in custody, high-profile conservative lawmakers and pundits have repeatedly hyped the allegation that he was an undercover fed.

While there very well could have been federal informants in the crowd, the argument that the entire riot was caused by shadowy forces as opposed to Trump supporters is merely part of the overarching effort to shift blame.

Much like the accusations against Epps, Hoft’s argument against Gionet appears to rest largely on the fact that the white nationalist isn’t in jail.

“Tim Gionet is a free man today as Americans he filmed rot in prison without a trial date,” Hoft wrote. “Why is that?”

In reality, the vast majority of the several hundred individuals charged in connection with Jan. 6 are not incarcerated at this time.

Gionet was arrested by the FBI for his involvement, which included live-streaming himself while inside Rep. Nancy Pelosi’s (D-Calif.) office. The white nationalist was charged with numerous counts such as unlawful entry, violent entry, and disorderly conduct on Capitol grounds.

After being released on bond from a federal lockup in Jan., Gionet was ordered by a judge to return to his home in Arizona and not come back to Washington, D.C. unless he was attending a court hearing. Gionet has since been soliciting donations for his legal defense against the charges.

The white nationalist responded to Hoft’s article on Wednesday by making numerous homophobic and antisemitic remarks before vowing to appear on a radio show to push back on the claims.

“Jim Hoft is a gay Israel first shill,” Gionet said on Telegram. “I am America First and do not bow to anyone but Jesus Christ!”

The feud highlight’s the growing division on the right in the wake of not only Trump’s election loss but the mounting arrests of his biggest supporters.