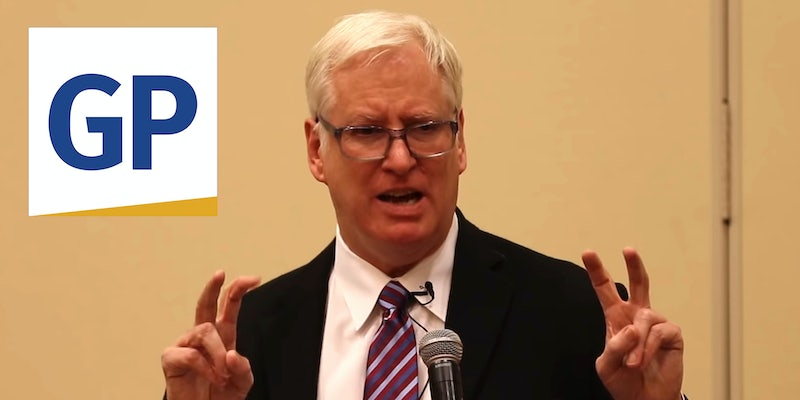 It's been pushing conspiracies for years.

Google Ads has terminated its relationship with far-right blog the Gateway Pundit.

The Gateway Pundit announced the decision in an article written last week by its founder, Jim Hoft. The article included an email from Andrew Tucker—a partnerships manager at Google—notifying the publication of its decision.

“Our goal is to help enable a free and open internet by giving publishers the ability to monetize their content. We do this by maintaining a clean and safe ad network that is part of a healthy digital advertising and publisher ecosystem,” the email from Tucker read. “We’re emailing to let you know that we’ve repeatedly found content on your site that violates our Google publisher policies.”

The violations of the Google Publisher Policy included dangerous or derogatory content that incites hatred, promotes discrimination, or disparages an individual or group as well as misrepresentative content.

The Gateway Pundit did not respond to a request for comment.

The publication has been sued multiple times for libel and defamation after its false reporting on the 2017 Unite the Right Rally in Charlottesville, Virginia and the 2020 election.

Google’s decision to demonetize the Gateway Pundit came a few days before the broadcast of a French documentary titled Fake News: The Money Machine in which journalists Aude Favre and Sylvain Louvet interview Benoit Tabaka, Head of Public Policies for Google France, and specifically ask about the Gateway Pundit. The Google representative walked out on the interview, which included being confronted with print-outs of Google’s ads on the site, after about 30 minutes.

“We asked Google what they were going to do about the Gateway Pundit and also a few other websites and they were supposed to come back to us before September,” the film’s co-director, Louvet, told the Daily Dot. “We had no news, and the day before the documentary, we checked the website and saw there were no Google ads anymore.”

In July, Forbes reported that the Gateway Pundit earned $1.1 million in Google Ad revenue in eight months from November 2020 to June 2021 as it published misinformation about vaccines and last year’s election. Google did not respond to the Daily Dot’s request for comment.

“Ad tech companies don’t care and don’t want to vet their inventory. They don’t want that responsibility,” Nandini Jammi, co-founder of brand safety site Check My Ads, told the Daily Dot. “So, they continue working with disinformation. They accept and continue working with disinformation outlets until they’re caught. And only when they’re caught do they drop these sites to avoid a PR crisis.”

Favre and Louvet also interviewed Hoft for their documentary. The Gateway Pundit subsequently published an article, “Bill Gates Linked Org. Sends Pretty French Honeypot to US in Effort to Take Down Gateway Pundit — But She Failed Miserably and Flew Back Home” which claimed that the publication filled out an unspecified “official complaint” against Favre.

Favre told the Daily Dot that she received the complaint the day Hoft’s article was published, warning her that she was prohibited from using any footage from the interview. A lawyer informed Favre that Hoft could not prohibit her from using the footage. She said she has not heard anything from Hoft since the initial warning.

Google is the fourth advertising platform to demonetize the Gateway Pundit. Criteo and AdRoll dropped the site after being called out for its monetizing on misinformation. Magnite, formerly known as Rubicon Project, removed advertisements on the Gateway Pundit after Jammi notified the company of the website’s policy violations.

“Google could totally demonetize disinformation on websites, but they would lose money,” Favre told The Daily Dot. “They actually wouldn’t lose much money at all. They could totally do it; it’s not threatening their business model at all.”

Google responded to the report on Twitter claiming that they “reviewed all six of the specific pages [the CCDH] identified yesterday and we immediately removed ads from the pages that did violate our policies. These pages made less than $200 in the last 90 days.”

According to Jammi, it is rare for Google to demonetize a website, let alone a high-profile disinformation outlet. In 2017, the company banned 200 publishers from its AdSense network in a two-month period after updating its disinformation news policy.

In June 2020, Google briefly demonetized far-right libertarian financial blog Zero Hedge due to its unmoderated comments section, which Google said consistently violated its policy against dangerous and derogatory material. The site’s monetization has since been reinstated.