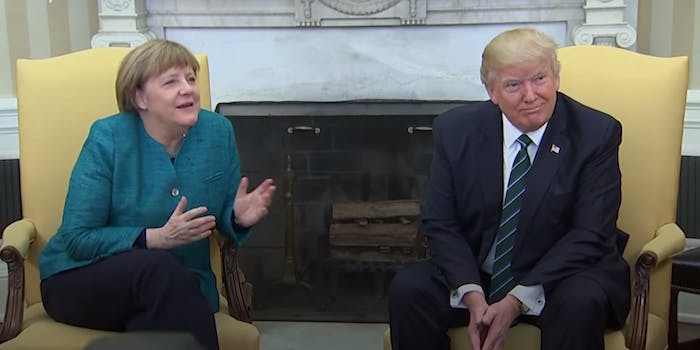 Should this make Americans nervous?

In the immediate aftermath of the NATO summit in Belgium and the G-7 summit in Italy, German chancellor Angela Merkel delivered a cautionary message to her fellow Europeans: It’s time to “take our destiny into our own hands” and not rely on the U.S.

That was the message she delivered at a campaign event in Bavaria this weekend, both reflecting on and predicting the future of European global leadership based on the events of the past week.

“The times in which we can fully count on others are on the way out,” Merkel said. “I’ve experienced that in the last few days.”

Here's the video of Merkel's speech in Munich saying that Europe can't rely on the US & the UK anymore and "must take destiny in own hands". pic.twitter.com/dq8cUOeT37

It’s impossible to see it as a coincidence that her words came hot on the heels of President Donald Trump’s first international trip, which seemingly went much smoother in Saudi Arabia than it did when he was rubbing elbows with the leaders of key democratic European allies.

Specifically, Merkel cited the issue of climate change to display how Europe could no longer depend on the global leadership of others―a not-so-veiled jab at Trump and his long history of climate change denial.

“The entire discussion about climate was very difficult, if not to say very dissatisfying,” Merkel told the German press, according to the Independent. “There are no indications whether the United States will stay in the Paris Agreement or not.”

Based on recent reports, to say there are “no indications” might even be an understatement. On Saturday, it was reported that Trump privately told some associates, including Environmental Protection Agency chief Scott Pruitt, that the U.S. will indeed abandon the Paris Climate Accord next week, although he publicly maintained (on Twitter, naturally) that the decision has not yet been made.

I will make my final decision on the Paris Accord next week!

Despite many of the awkward, headline-grabbing moments that Trump’s meetings with European leaders generated, more than one of which had to do with his relationship with freshly minted French President Emmanuel Macron, the fate of the Paris Climate Accords is the biggest existential issue that was discussed.

Even when stacked up against more dramatic, dire issues like terrorism, there’s really no other issue that will unavoidably impact the entire world in the same fashion, making it plain why American allies are so spooked by Trump’s longstanding denialist views.

Reports suggest that several European leaders put on a full-court press to try to get Trump to pledge to stay in the agreement, which was struck in 2015. But from the sounds of things, it didn’t work―like he infamously quipped in the run-up to the 2016 election, it seems Trump intends to keep everyone in suspense.