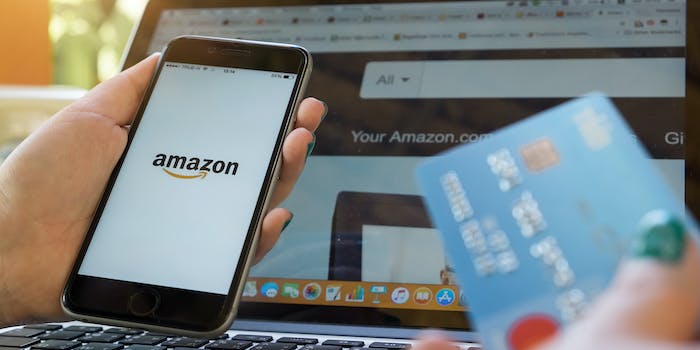 The complaint said Amazon was 'deliberately obfuscating' labels for ads.

A coalition of labor unions has filed a complaint with the Federal Trade Commission (FTC) that alleges Amazon is “unlawfully deceiving” consumers by not properly disclosing ads in search results.

The complaint was filed by the Strategic Organizing Center (SOC) on Wednesday. In it, they allege that Amazon is failing to “clearly and conspicuously” disclose what items are advertisements and what are “organic” search results when consumers search for items on the platform.

“SOC has found evidence that Amazon is systematically flouting FTC guidance for such disclosures, and in ddition is deliberately obfuscating identification of a key category of advertisements by delaying their ad labels from loading for several seconds,” the complaint reads.

The complaint says it analyzed more than 130,000 product searches on Amazon—both on desktop and on the mobile app—and found that Amazon was “substantially or entirely out of compliance with all the FTC’s specific guidelines for the visual identification of online advertisements on search engine pages intended to ensure that consumers are able to distinguish advertisements from organic search results.”

In that same analysis, SOC said that 28 percent of all search results were third-party advertisements.

In 2013, the FTC sent guidance to search engines about advertisements included in search results. The FTC said that ads should have “a different background color or ‘shading'” and a “text label” to help consumers distinguish the difference between ads and organic search results.

“Amazon is selling its advertisers the best real estate on its search results pages and then, in an attempt to improperly influence customers’ clicks and purchases, obfuscating the fact that these so-called results are actually content paid for by third parties,” Michael Zucker, SOC’s executive director, said in a statement. “Our analysis shows such a pervasive—and deceptive—use of advertising by Amazon that we’re calling on the FTC to determine whether the company’s search pages are truly even search results or just a list peppered with hard-to-identify ads.”

In a statement to the Daily Dot, Amazon defended itself and disputed the SOC complaint’s findings.

“This report is incorrect and misstates FTC guidance—ads in Amazon’s store always include a clear and prominent ‘sponsored’ label, implemented in accordance with FTC guidelines,” a spokesperson told the news outlet.

In the complaint, SOC urged the FTC to act “decisively” to “halt Amazon’s misleading abuses of consumer trust.”

“The vast deception being perpetrated by Amazon through its blatantly unlawful advertising practices affects millions of consumers every day and should be halted,” the complaint reads, later adding: “An actor as powerful and dominant as Amazon, that is clearly using this power to deceive customers through its lucrative and growing advertising business, warrants aggressive and swift action by the Commission.”

This post has been updated to include a statement from Amazon.