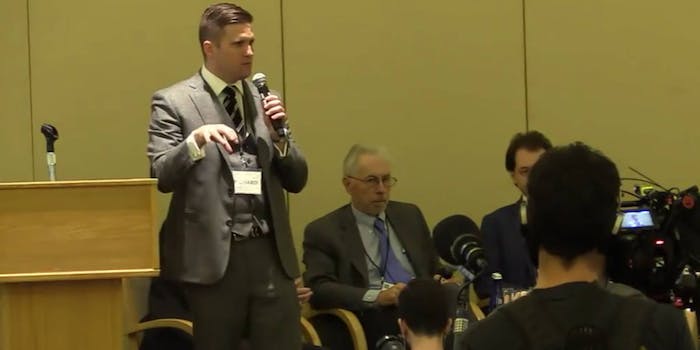 Many of the alt-right stars were there.

Few political movements are getting as much ink right now as the so-called alt-right, a collection of nativists, white nationalists, racists, and reactionaries that have been dramatically emboldened by the victory of President-elect Donald Trump. One of the leaders of that movement, Richard Spencer, was center-stage at an event in Washington, D.C. on Saturday, espousing an openly racist worldview that he and his cohorts hope will spread throughout the United States under Trump’s administration.

Spencer is the chairman of the National Policy Institute—a benignly named organization that champions the alt-right and all its attendant xenophobia, anti-Semitism, and white supremacy—and he held a day of conferences this weekend. The slogan of the whole event, also far more benign than the underlying racist politics would suggest, was “Become Who We Are.”

The event in DC is organized by Richard Spencer, a prominent alt-right/white nationalist https://t.co/S0GQu1GcFr pic.twitter.com/fbnSCv0Voz

Richard Spencer: "The Trump movement was kind of a body without a head. The alt right, as an intellectual vanguard, can complete Trump."

Richard Spencer: "The Trump movement was kind of a body without a head. The alt right, as an intellectual vanguard, can complete Trump."

According to the Washington Post’s Dave Weigel, who covered the conference live throughout the day, there were any number of statements from Spencer that would not be uttered in polite, non-white supremacist society, but they are nonetheless worthwhile for understanding the nature and underlying philosophies of his movement.

For instance, his reported enthusiasm that Trump attorney general appointee Jeff Sessions might be negligent toward enforcing anti-discrimination housing laws. Or on the multiple allegations of sexual assault against Trump, Spencer reportedly asserted that “women deep down do want to be taken by a strong man,” citing romance novels in his defense.

The conference also drew out former reality TV star and notorious Twitter racist Tila Tequila—who in the years since her period of greatest fame has become an open embracer of the alt-right and (there’s no other way to put it) an overt neo-Nazi.

Her Twitter timeline is a font of anti-Semitic hate, her header image a photo of herself in a Nazi uniform standing in the Oval Office next to Trump. And, while at Saturday’s event, she threw up a Hitler salute. The conference was also reportedly attended by right-wing journalist/troll/harasser Chuck Johnson, who’s been banned from Twitter for more than a year due to threatening remarks he made toward activist DeRay McKesson.

Tequila’s Hitler salute is a significant image, because the alt-right (both at this conference and in its messaging) straddles the line between flagrant expressions of racial hatred and a subtler fixation on white identity that nonetheless achieves the same end. The conference reportedly covered topics from “Trump and the New White Voter,” to “America and the Jewish Consciousness” and “Trump and being a man”—not fire-breathing titles, exactly, but driving at a very clear shared message of white supremacy and masculine domination.

Heidi Beirich of the Southern Poverty Law Center told the Los Angeles Times that this is essentially the modus operandi for the surging alt-right—taking some very old ideas but presenting them from well-groomed white men in sharp-cut business suits instead of raving skinheads. “This is how you sneak these ideas into the mainstream,” she said. “The guys in the suits are the ones we have to worry about.”

Outside the DC white-nationalist conference feat. Tila Tequila right now: a "down with fascism!" protest pic.twitter.com/NS2d0LGnrl

Spencer also enthusiastically proclaimed that the alt-right is “the establishment now,” and while that might sound a little strange, it’s not so far-fetched. While some on the far-right have dramatically overstated the scale of Trump’s victory—it’s possible Trump will have lost the popular vote tally by nearly two million when it’s all over—the people he’s putting in power says a lot.

For instance, Trump’s pick of Steve Bannon,  the former CEO of online alt-right haven Breitbart, for chief strategist. With people like this in the halls of power, it’s fair to conclude that this latest racist political movement is going to be exerting influence in the White House for years to come.