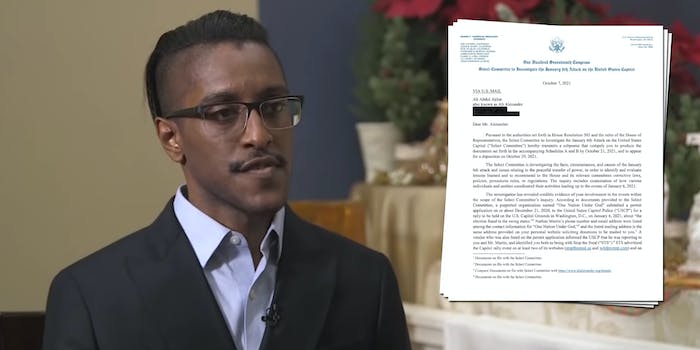 Alexander and another Stop the Steal organizer were issued subpoenas.

The committee in Congress investigating the Capitol riot subpoenaed Ali Alexander, one of the organizers of the “Stop the Steal” rally, on Thursday to provide documents to and testify in a deposition.

Alexander’s subpoena was one of three to be issued by the select committee on Thursday. One of them, Nathan Martin, was another rally organizer. The third subpoena was sent to Stop the Steal LLC.

“The rally on the Capitol grounds on January 6th, like the rally near the White House that day, immediately preceded the violent attack on the seat of our democracy. Over the course of that day, demonstrations escalated to violence and protestors became rioters. The Select Committee needs to understand all the details about the events that came before the attack, including who was involved in planning and funding them. We expect these witnesses to cooperate fully with our probe,” Select Committee Chair Bennie G. Thompson said in a statement.

The subpoenas require Alexander to produce records by Oct. 21 and testify at a deposition on Oct. 29.

Alexander worked to plan and promote one of the rallies in D.C. on Jan. 6 which preceded the violence riot at the Capitol. At the Capitol riot, supporters of President Donald Trump stormed the building in a failed attempt to stop the certification of the 2020 election. Trump repeatedly claimed, falsely, that the election was fraudulent. There is no evidence to back up that claim.

“The investigation has revealed credible evidence of your involvement in the events within the scope of the Select Committee’s inquiry,” Chairman Thompson wrote in the letter to Alexander.

The letter also noted that, “in the weeks before the January 6th attack, [Alexander] made repeated references during Stop-the-Steal-sponsored events to the possible use of violence to achieve the organization’s goals.”

Following the rally, Alexander, or someone working with him, attempted to hide his connection to the rally by trying to anonymize his personal information on the registrations for more than 100 website domains. Around half those domains were related to Stop the Steal, the Daily Dot previously reported.

You can read all of the committee’s letter to Alexander here.