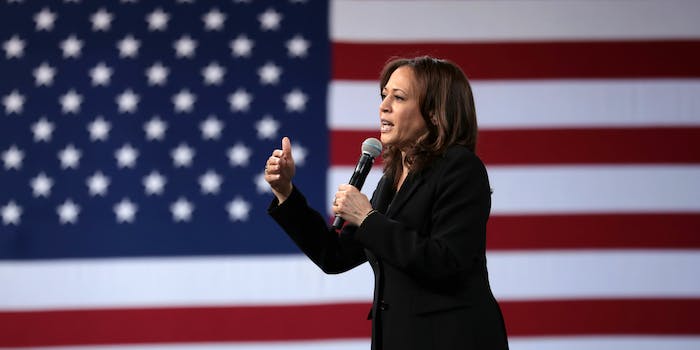 Are the bots at it again?

A slew of accounts on Twitter appeared to claim that presidential candidate Kamala Harris (D-Calif.) is not Black, largely in part to her comments on bussing when she grilled her colleague Joe Biden at the Democratic debate’s second round on Thursday.

In it, she referred to a “little girl” who was working to integrate schools. “That little girl was me,” she said.

A series of Twitter accounts attacked her for being “not Black,” as pointed out by disinformation researcher Caroline Orr:

A lot of suspect accounts are pushing the “Kamala Harris is not Black” narrative tonight. It’s everywhere and it has all the signs of being a coordinated/artificial operation. #DemDebate2 pic.twitter.com/DTeB2qWJnm

Some of the tweets in Orr’s screenshots, such as by usersShyam Thyoadmin, @Reebfree, @kjjdc12345 and @shyndixie did not appear in a Twitter search on Friday morning.

You like the rest are phony. You're not African American, black American you're Jamaican/ Indian!

@KamalaHarris you are not black. Your mother is Indian and your father Jamaican. You are probably discriminated against but haven’t most of us also dearth with this.

The clamor went all the way up to the president’s son, in a tweet he’s since deleted.

Donald Trump Jr. publicly questioned whether Kamala Harris is black and then deleted it. The media is missing. You can fight back right now against Trump Jr. by making a donation directly to Kamala and helping us have her back too. Retweet & chip in here: https://t.co/12f5cv5bDr pic.twitter.com/iIT1yVL6MA

In a comment to the Daily Dot, Twitter said that the tweets about Harris’ race were not the work of coordinated campaigns.

What is relevant for many in the Black community is Harris’ “tough on crime” history that has put Black men in prison, which some users on Twitter pointed out—and also proved that you can do so without questioning someone’s racial heritage:

A necessary reminder: Kamala Harris was a prosecutor who let criminals like Mnuchin go free as she locked up black and brown folk for things like pot and truancy, denied parole to inmates for use of their labor and feigned ignorance of doing it. She's not what she pretends to be.

Harris, who is the daughter of an Indian immigrant and Jamaican immigrant, has had people obsess over race before, and she remains unphased by the confusion others tend to project on her.

“I am who I am. I’m good with it” she recently said, and refers to herself with just one word: “American.” If elected, she would be the first African American, first Indian American, and first Asian American to take a seat at the White House.