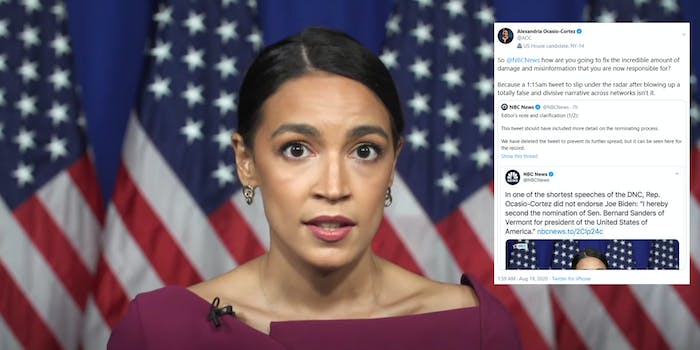 AOC rips NBC for tweet about her DNC speech

A tweet about her speech seconding the nomination of Bernie Sanders drew her unfounded criticism.

Rep. Alexandria Ocasio-Cortez (D-N.Y.) ripped NBC News for a tweet about her speech during the 2020 Democratic National Convention on Tuesday night, calling it “misinformation.”

During her speech, Ocasio-Cortez seconded the nomination of Sen. Bernie Sanders (I-Vt.), part of the formal process for the convention before states began a roll call where they tallied votes for candidates from the primary election.

Because Sanders was the runner-up in the election, he would also receive votes and needed his nomination to be seconded so it could move forward.

However, Ocasio-Cortez took issue with a particular tweet from NBC News, where the news outlet wrote:

“In one of the shortest speeches of the DNC, Rep. Ocasio-Cortez did not endorse Joe Biden: ‘I hereby second the nomination of Sen. Bernard Sanders of Vermont for president of the United States of America.”

Ocasio-Cortez has endorsed Biden, and served as a co-chair of the climate portion of the unity team the former vice president and Sanders created to offer suggestions for policy.

NBC News later deleted the tweet and offered a clarification on what transpired.

“This tweet should have included more detail on the nominating process. We have deleted the tweet to prevent its further spread, but it can be seen here for the record, the news outlet wrote in a series of tweets. “Ocasio-Cortez was asked by the DNC to second Sanders’ nomination. The nomination is a procedural requirement of the convention. Ocasio-Cortez has previously endorsed Biden, & her speech was similar in length to other nominating speeches.

However, the New York lawmaker blasted the news outlet for leaving up the original tweet for as long as it did, saying that it was “blatantly misleading” and that it “sparked an enormous amount of hatred and vitriol.”

“So @NBCNews how are you going to fix the incredible amount of damage and misinformation that you are now responsible for? Because a 1:15am tweet to slip under the radar after blowing up a totally false and divisive narrative across networks isn’t it,” Ocasio-Cortez wrote.

The New York lawmaker also tweeted congratulations to Biden just 20 minutes after the original tweet from NBC News, saying that she looked forward to “fighting for our future together and reclaiming democracy in November.”

And just 10 minutes after the NBC News tweet, Ocasio-Cortez tried to make sure everyone knew her seconding the nomination of Sanders was procedural.

“If you were confused, no worries! Convention rules require roll call & nominations for every candidate that passes the delegate threshold. I was asked to 2nd the nom for Sen. Sanders for roll call. I extend my deepest congratulations to @JoeBiden – let’s go win in November,” she tweeted.