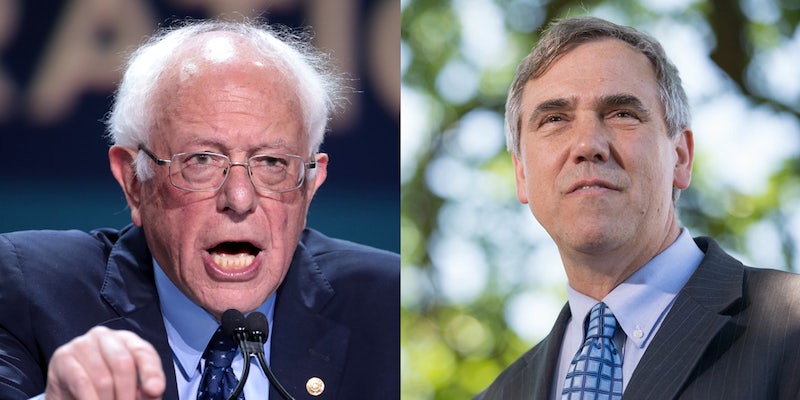 The bill is similar to an Illinois law that's been at the heart of several lawsuits.

A new Democrat-backed facial recognition bill would require companies to get consent from people before using or collecting their biometric information.

Merkley and Sanders’ bill would require companies to get consent from people before collecting eye scans, voice prints, face prints, and fingerprints. It would also allow for customers to sue companies that violate the law.

“We can’t let companies scoop up or profit from people’s faces and fingerprints without their consent,” Merkley said in a statement. “We have to fight against a ‘big brother’ surveillance state that eradicates our privacy and our control of our own information, be it a threat from the government or from private companies.”

The requirement to obtain consent is similar to the Illinois Biometric Information Privacy Act (BIPA), a law that has been at the heart of a number of lawsuits against tech companies.

Most recently, Facebook agreed to pay a total of $650 million to settle a lawsuit alleging the company violated the Illinois law by using facial recognition to suggest users to be tagged in photos.

The social media giant originally agreed to pay $550 million, but upped the settlement after a a judge questioned whether that amount was an adequate amount of money.

The Illinois law was also the crux for a lawsuit filed by the American Civil Liberties Union (ACLU) against Clearview AI, the controversial facial recognition startup that collected a massive database of unsuspecting people’s photos by scraping public-facing pictures online.

That isn’t the first suit brought up against Clearview using the Illinois law. In January, a suit was filed that aims to expunge information law enforcement may have collected using Clearview’s database.

Experts told the Daily Dot earlier this year the Illinois law served as a good blueprint for a potential national-level law.

Adam Schwartz, a senior staff attorney at the Electronic Frontier Foundation (EFF), wrote on Tuesday that the Merkley-Sanders bill “improves upon” the Illinois law.

“The National BIPA bill improves upon Illinois’ BIPA law, which is one of the most important privacy laws in the United States,” Schwartz wrote in a blog post. “EFF and other privacy advocates have long worked in legislatures and courts to protect and expand this model.”

Similarly, Fight for the Future—which has pushed against the use of facial recognition—cheered the new bill.

“We believe most private and corporate uses of facial recognition should be banned entirely, but this new legislation will play an important role in slowing down the unfettered creep of this technology into our daily lives,” Evan Greer, the deputy director of Fight for the Future, said in a statement.

This is the second major facial recognition bill introduced by Democrats in recent weeks.

Fifteen Democrats have backed the “Facial Recognition and Biometric Technology Moratorium Act,” which would ban the use of facial recognition by federal entities for an extended period of time. The moratorium barring its use would need to be lifted by an act of Congress.