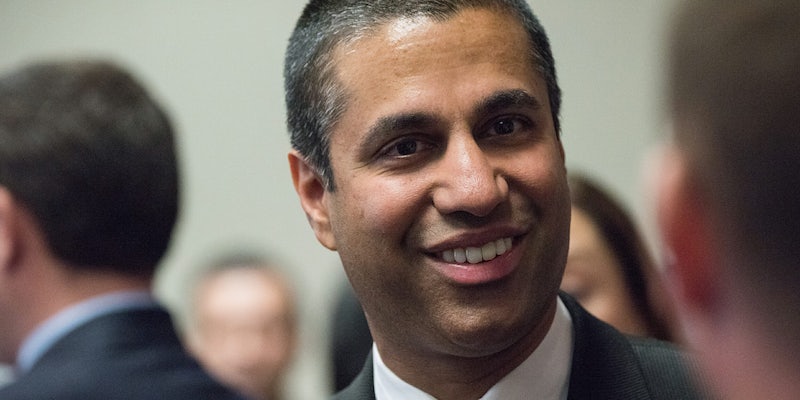 It really didn't go over well.

On Tuesday, the Federal Communications Commission (FCC) unveiled its plan to gut Obama-era rules demanding fair treatment of internet traffic and, of course, the commission’s chairman, Ajit Pai, tweeted about it.

Considering the consequences the FCC dismantling net neutrality rules could have on the internet as it currently operates, it’s not shocking that Pai’s tweet—where he shared an op-ed piece he wrote for the Wall Street Journal—was met with fierce push-back from internet users from nearly the second it was posted.

The FCC is scheduled to vote on the “Restoring Internet Freedom Order”—the name given to dismantling net neutrality, a founding principle of the internet—next month. The order would gut net neutrality rules that prevent internet providers from manipulating internet data, such as slowing down or speeding up a certain service or app or censoring online content altogether. (For example, under the current rules, an ISP can’t slow down Netflix in favor of its own streaming device.) In a press release, Pai called the rules “heavy-handed” and said his order would stop the government from “micromanaging” the internet.

“Today, I’m proposing to repeal the heavy-handed internet regulations imposed by the Obama administration and to return to the light-touch framework under which the internet developed and thrived before 2015,” Pai wrote.

Most internet users, it seems, did not agree.

Today, I’m proposing to repeal the heavy-handed Internet regulations imposed by the Obama Administration and to return to the light-touch framework under which the Internet developed and thrived before 2015. In @WSJopinion: https://t.co/uDIiKr6YHF

As of Tuesday afternoon, the tweet had over 9,200 replies, but only 900 retweets and 1,310 likes—a perfect example of “the ratio,” which is shorthand for a tweet inspiring far more people to respond negatively in comments than to like or retweet.

It appears that Pai’s tweet on Tuesday drew a similar level of ire.

You have sold out consumers and entrepreneurs to advance the agenda of deep-pocketed media giants. Innovation will be stifled and prices rise.

SHAME on you. #NetNeutrality

#NetNeutrality allows people to compete better on an open market. If I want to sell a good, I have the same competitive space on the internet as Amazon does. Killing net neutrality rules hurts everyone: left or right, rich or poor. This is also a potential 1st Amendment issue.

The FCC is scheduled to vote on its plan on Dec. 14. So far, more than 22 million people have commented on the proposal, with the vast majority of the comments urging the commission to drop the plan and let strong net neutrality rules live on.