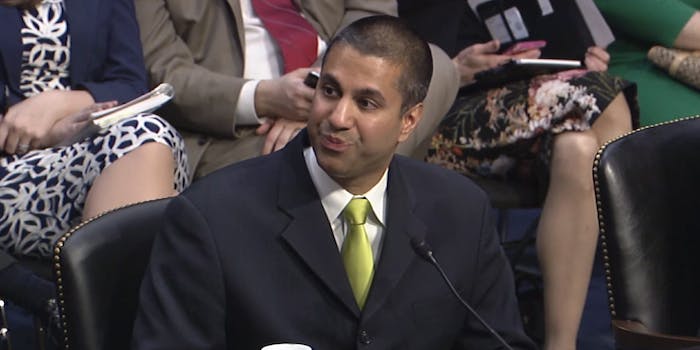 Pulling back the rules of the Open Internet Order could have a number of consequences.

The Federal Communications Commission (FCC) is expected to announce plans to dismantle Obama-era rules that demand fair treatment of internet traffic, a move that critics say will destroy net neutrality as we know it.

Net neutrality, one of the founding principles of the internet, is the concept that internet service providers (ISPs) must treat all data delivered to customers equally. This means ISPs should not speed up some data or slow down other data, such as streaming Netflix at half the speed while serving Amazon‘s Prime Video at full speed.

Until 2015, however, the federal government did not have strong regulations requiring ISPs to abide by net neutrality principles, thanks in large part to legal challenges from companies like Verizon and AT&T.

Rolling back the rules now would reshape the idea of net neutrality, which creates a level playing field on the internet. And that could happen sooner than you might think.

The FCC plans to fully repeal the net neutrality rules under the Open Internet Order, signed in February 2015, which places ISPs under a more restrictive portion of the Communications Act.

Under the order, broadband internet providers are regulated as “common carriers” under Title II of the Communications Act, essentially putting them under the same regulatory category as electricity. Restricted by portions of Title II, internet service providers cannot speed up or slow down websites or online services based on its own agenda.

FCC Chairman Ajit Pai, an appointee of President Donald Trump, has been in favor of scaling back the rules–much to the dismay of internet freedom advocates. Pai is seeking to vote in December to roll back the rules.

Earlier this year Pai proposed putting broadband internet service under Title I, which would allow it to be regulated as an “information service,” paving the way for the dismantling of net neutrality.

Without strong net neutrality rules in place, critics of the FCC’s plan warn that ISPs could begin to institute “tiered” internet plans, much in the same way that television providers offer different cable TV packages. For example, your ISP might offer one plan that includes access Bing‘s search engine but not Google‘s, or to Twitter but not Facebook, while only the most expensive plans would give customers access to the internet as they do today. Others worry about censorship and limits on freedom of expression online.

Many ISPs, for their part, deny having plans to wall-off sections of the internet for their customers in an attempt to increase revenue.

Why is the FCC doing this?

Pai has argued that the Open Internet Act is an example of too much government regulation, according to the Washington Post. The chairman has said that the regulations discourage companies from investing in upgrades to their infrastructure.

It’s likely that the plan, which the ISP industry supports, will be passed because Republicans control three of the five seats on the FCC’s board. It is possible, if unlikely, that lawmakers in Congress could prevent the FCC from voting to overturn the 2015 Open Internet Order.

Internet advocates, technology companies, and other organizations have come out against rolling back the 2015 net neutrality rules.

Over the summer, more than 125,000 websites and organizations participated in the Internet-Wide Day of Action To Save Net Neutrality, where websites displayed ads, banners, and videos warning people what the internet would be like without net neutrality.

The goal of the protest was also to get people to comment on the FCC’s website against the idea of regulating ISPs under Title I.

Overall, the Day of Action saw nearly triple the number of comments submitted to the FCC during the 2014 “Internet Slowdown” that pushed the commission to establish net neutrality protections.

Fight for the Future (FFTF), the internet freedom advocacy group that organized the Day of Action, is now telling net neutrality proponents across the United States to call their representatives in Congress in an attempt to push lawmakers to block the December FCC vote.

FFTF has rolled out an embeddable widget that allows website visitors to easily call their representatives. As of Monday, the tool has been used to call lawmakers more than 235,000 times.

The FCC is expected to announce its plan on Tuesday, Nov. 21, with a vote expected to take place on Dec. 14.

Update 7:18am CT, Nov. 21: The FCC’s plan will include a full repeal of the commission’s net neutrality rules, the New York Times reports. The planwill be unveiled on Tuesday, a day earlier than originally expected.