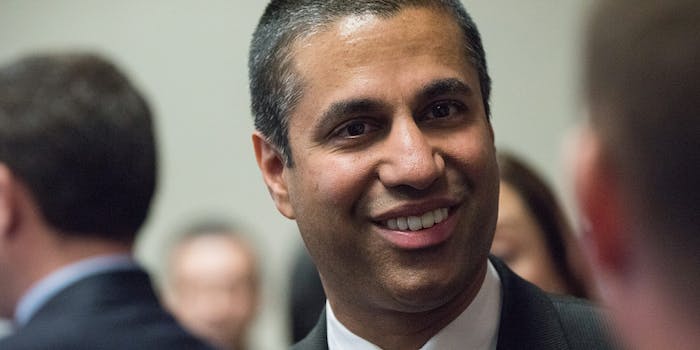 The petition was up for less than a week.

A White House petition calling for FCC Chairman Ajit Pai to resign over his plan to kill net neutrality rules has reached the threshold to warrant a response from the Trump administration.

As of Wednesday afternoon, the petition had over 103,000 signatures just under a week since its creation. Getting 100,000 signatures on a We the People petition triggers a response from the White House within 60 days. Pai was appointed to lead the Federal Communications Commission by President Donald Trump.

Pai’s plan to gut net neutrality, a founding principle of the internet that requires all internet traffic to be created equally, has been scrutinized since his announcement last week that he intends to place the internet under a less stringent form of regulation.

Critics say Pai’s plan opens the door for internet service providers to slow down or block web traffic—for example, slowing down Netflix in order to promote its own streaming service—or raise prices on internet customers for internet plans that have access to certain websites.

The passion to keep net neutrality rules extends across political lines and earlier this year brought together thousands of websites, tech giants, and activists when they launched the Internet-Wide Day of Action To Save Net Neutrality, which ultimately led to triple the number of comments submitted to the FCC than the 2014 “Internet Slowdown” that pushed the commission to establish net neutrality rules.

The FCC is scheduled to vote on Pai’s proposal on Dec. 14. It is likely to pass because Republicans control three of the five seats on the FCC’s board.

You can see the petition here.