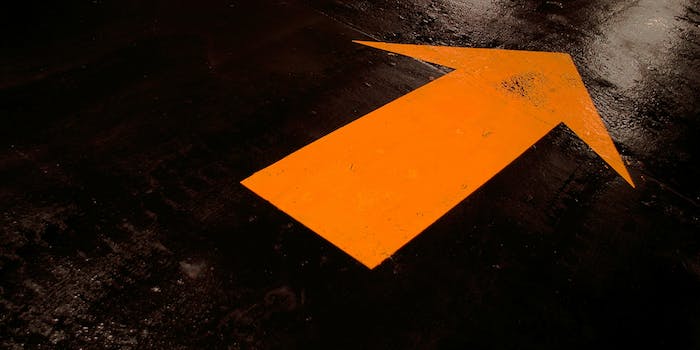 Reddit vows to protect user privacy—but not if you're Jennifer Lawrence.

Warning: This article contains language and subject matter that may be NSFW.

On Sunday, hackers leaked dozens of intimate photos of numerous celebrities, including Jennifer Lawrence, Kate Upton, Krysten Ritter and Ariana Grande, in what many have dubbed #CelebGate. The users of popular link-sharing site Reddit have given a more masturbatory name: “The Fappening.”

The flagrant sharing of these intimate photos has sparked a strange conflict among Redditors: The site has a robust position as a platform for unfiltered free speech, but redditors also fiercely guard their privacy. Disclosing the identity, or “doxing,” other users is strictly prohibited by Reddit’s rules, and users who violated are regularly banned from the site. For now, however, it looks like the “free speech” side is winning.

Originally leaked to 4chan’s notorious /b/ imageboard by a hacker allegedly seeking Bitcoin donations, the photos have spread across the Internet like wildfire, to the dismay of the celebrities involved.

Reddit has become a particular hub for the photos. While Reddit hosts none of the photos itself, its users are linking to them off-site and discussing them with impunity—and now the moderators of the new community (called a subreddit) r/thefappening claim that the site’s admins are aware of the photos and happy to see them shared on Reddit, despite the threat of legal action.

Reddit’s site-wide rules forbid the posting of “person information,” which these photos certainly seem to constitute. Posting “publicly available” information on celebrities is acceptable—but “it is not okay” to post links to “screenshots of Facebook profiles,” or anything potentially “inviting harassment.” If a users’ Facebook photos are a no-go, then it seems implausible in the extreme to suggest that stolen intimate photos could not also be considered “personal information.” Despite this, links to previous leaked photos shared on the site—including of Demi Lovato and Jennette McCurdy—remain live, several months later.

Twitter is actively deleting the photos, and reportedly suspending users who continue to face them, and image-hosting site Imgur also appears to be taking steps to remove the content—though dozens of albums are still online and linked to from across Reddit.

Some users have accused Reddit admins of censorship and deleting the photos—but this does not appear to be the case. Instead, individual mods of some subreddits are taking the proactive decision to delete the images; for example, the mods of r/jenniferlawrence, an early repository of the photos, have decided “to remove all of them and continue to keep this sub clean of them.” Meanwhile, r/celebs’ moderators have made the decision to continue to link to them, apparently without consequences.

“It seems pretty scummy (to me, at least) to allow this stuff here since it was obtained without the consent of the women involved,” but nonetheless, “as of right now, we are still allowing these pics here,” reads an official statement by r/celebs moderator atticus138.

The epicentre of the leaked photos, r/thefappening, has gained almost 75,000 subscribers in its 15-hour lifespan—a number that continues to rise by the minute. An official statement in the subreddit apparently confirms that the Reddit admins are indeed are aware of the subreddit, but have simply decided to remove r/thefappening from appearing on Reddit’s front page of most-popular posts, known as r/all.

“Some of you have wondered why you are not seeing any posts from this subreddit in r/all,” a statement reads. “Per the suggestions of reddit’s admins we have decided to remove this subreddit from r/all indefinitely. We did not act on this until we were contacted by the admins and they politely suggested we take this action.”

In the absence of confirmation, there is another option: that the moderators of r/thefappening are lying about the contact with Reddit administrators. But it’s unclear why they’d do this: Lying about the admins’ policies would likely endanger their subreddit’s existence, and other the mods subreddits—notably r/celebs—freely admit that they’ve made similar decisions to withdraw from r/all “because it seemed to be in bad taste,” without any admin involvement.

One user speculates that the admins are trying to keep the content “quarantined” in r/thefappening—but even if the subreddit’s moderators are lying, the photos are nonetheless being shared widely across Reddit with seemingly no repercussions.

So, is Reddit’s stance actually illegal? It’s unclear. Reddit hosts none of the images itself (the site doesn’t have that functionality), but the site’s admins appear to be happy to continue to have them linked to. A spokesperson for Jennifer Lawrence has already confirmed that they intend to “prosecute” anyone who posts the photos, but it’s not clear if this threat extends to websites that allow the posting of links to them, or what criminal charges might be used against those who share the photos online.

Of course, even if it’s not illegal, then that doesn’t mean it’s ethical. Lawrence’s spokesperson described the leak as a “flagrant violation of privacy,” and linking to the photos seems to run counter to Reddit’s own strongly pro-privacy culture. After Gawker’s Adrien Chen unmasked the identity of controversial moderator Violentacrez, the moderators of dozens of large subreddits made the decision to ban Gawker articles, so fiercely they guard their users’ privacy. As such, Reddit’s admins’ apparent position is out-of-kilter with its own rules and the community’s collective values.

This seeming contradiction has not gone unnoticed: Twitter users have lined up to lambast the site and its users for sharing the photos, with Reddit “celebrity” shitty_watercolor among the critics:

Reddit/4chan/etc: “The NSA is invading our privacy. Expose them.” “Dude, look at these nude photos of Jennifer Lawrence some guy stole!”

Some Redditors defend the sharing of the photos on principle, with Megaross saying “no one has the right to say what you shouldn’t see,” and that “it’s a slippery slope from celebrity nudes to political statements to media alteration and blackout.” Others, however, are extremely critical of those that defend the photos on the grounds of free speech. 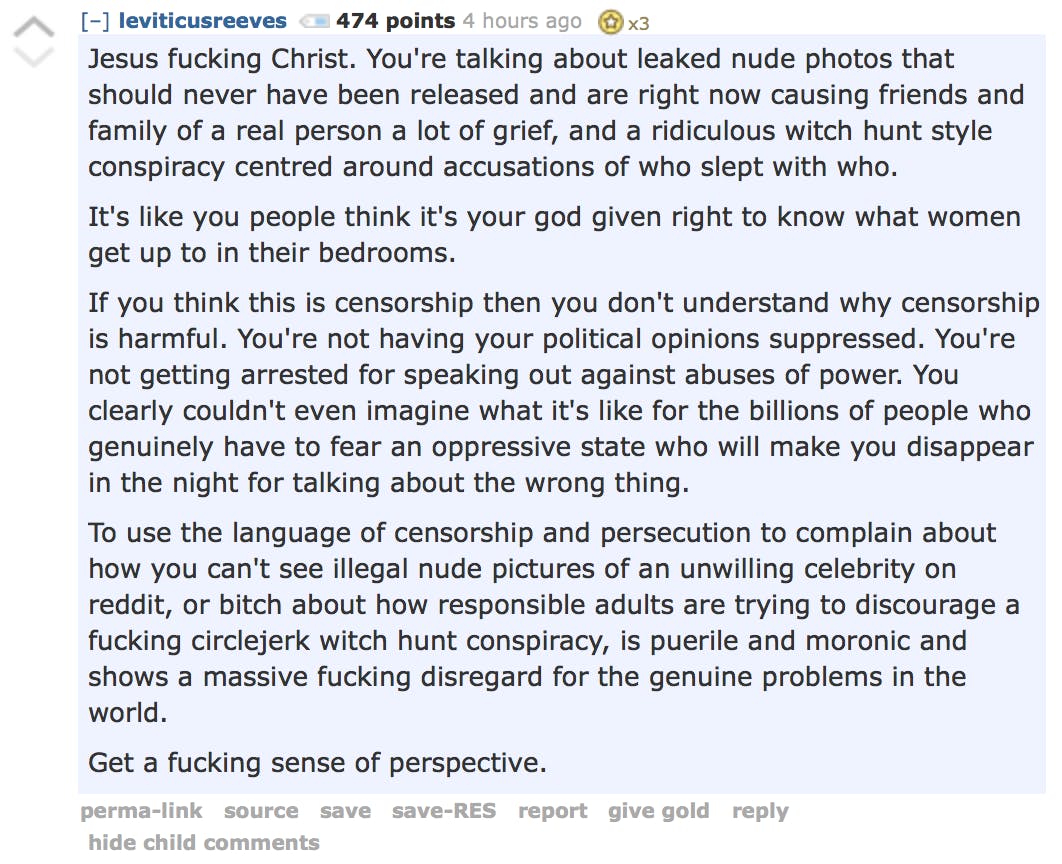 In a moment of extreme irony, the moderators of r/thefappening have actually warned redditors that if they post any information about the potential identity of the leaker(s) of the photos and videos, they will immediately be “BANNED FROM THIS SUBREDDIT.”

Redditors on r/videos have also poked fun at the userbase’s hysterical reaction the photos with videos:

Some of the actresses involved have claimed the alleged photos are “fake”—but others, like Lawrence, have confirmed their veracity. Actor Mary Elizabeth Winstead angrily railed against those posting the photos on Twitter:

To those of you looking at photos I took with my husband years ago in the privacy of our home, hope you feel great about yourselves.

Glee star Becca Tobin, on the other hand, seems to have embraced the leak of her private photos—or at least decided to feign lightheartedness:

Reddit’s admins may yet perform an about-face and ban the subreddit and links to the photos: After all, it wouldn’t be the first time the site curtailed discussion of a breaking news story after it got out of hand. In the aftermath of the 2013 Boston Bombings, a subreddit established to search for clues descended into a “witch hunt,” admitted the admins, doxing totally innocent Americans, and was eventually banned.

But even if that happens, the fact remains: Reddit admins apparently saw the growth of r/thefappening, discussed it, and chose to do nothing.

The Daily Dot has reached out to Reddit, to Imgur, and to the moderators of r/thefappening, and will update if they respond.