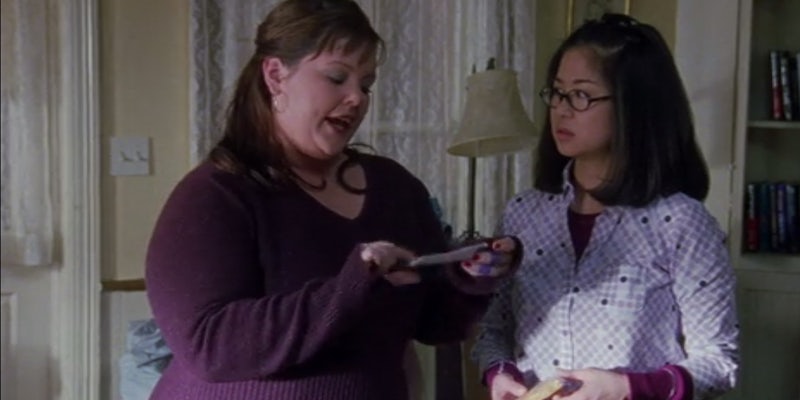 If you want to understand exactly what made Gilmore Girls so unique as a series, look at all the things it wasn't.

The coming of Gilmore Girls to Netflix caused a minor Internet sensation last month, spurring a round of major celebration, bouts of nostalgia, and think pieces about just why the series was so special.

I’m a longtime fan of Amy Sherman-Palladino’s iconic celebration of women, small-town New England, and nuclear families biological and surrogate and think there’s still more to say about the many ways in which Gilmore Girls was groundbreaking. Compared to other important women-led shows of the late 90s and early 2000s, Gilmore Girls has been slow to achieve widespread cultural acclaim for its portrayal of female characters. But if you examine the tropes upon which the stories of Lorelai, Rory, and Emily Gilmore were built, Gilmore Girls seems far more progressive for its era in many ways than even its watershed counterparts like Ally McBeal and .

Gilmore Girls probably owes its failure to attract widespread acclaim despite running for seven seasons to the traditional cultural devaluation of female-driven genre media, whether it comes in the form of Young Adult fiction, women’s fiction, or female-led Hollywood narratives. Given that Gilmore combined elements of all of the above, it’s no wonder the only Emmy it ever received was for Outstanding Makeup.

Today when critics reference the influence of Gilmore Girls, it’s usually in discussions of structure rather than substance: like the witty character banter, its clever and iconic use of soundtrack cues, and the incorporation of setting into the narrative. But this is a huge injustice to the house that Sherman-Palladino built on those foundations, and especially the amazing female characters who dwelt there.

It’s not just that Gilmore Girls unfailingly left the Bechdel Test crying in the dust each and every episode. It’s that Gilmore Girls is an early successful example of everything Hollywood‘s Exclusion Myth tells us isn’t supposed to be possible: a narrative built around women and women’s plots, relationships, and conflicts—one that successfully engages a wide demographic and doesn’t have the “excuse” of being a blockbuster action-adventure serving as an exception to a widely held rule.

In fact, there’s a much better way to discuss Gilmore Girls and its cultural impact. Instead of comparing it to more critically acclaimed and culturally recognized shows like Buffy, look at what Gilmore Girls didn’t do. When you examine all the stereotypical issue-laden tropes Gilmore Girls never once fell back on, its ability to tell a compelling and long-running story with a solid and loyal audience suddenly becomes astonishing. Gilmore Girls by rights never should have existed, let alone run for seven seasons. Not even Buffy can say it eschewed the harmful tropes into which women are often shoehorned to the extent that Gilmore Girls did.

Here’s a list of some of the plot and character staples that Gilmore Girls never once used in its miraculous seven-year run:

Though women at the margins of Emily Gilmore’s life were frequently portrayed as catty and petty, the narrative brushed off these traits, refusing to engage with the characters just as Lorelai refused to engage with the more superficial aspects of her parents’ lives. Although Paris tried hard to make Rory her rival, Rory never likewise engaged unless it was to hold the olive branch out just a little further.

And while we were made aware early on that Paris’s competitiveness had nothing to do with Rory, over the years we got to see something rare for a TV series featuring teenage girls: a realistically developing friendship between girls that showed them evolving ways to stay intellectually competitive without tearing each other down.

Again, though Rory was occasionally put into the position of competing with other girls over guys, most notably with Paris over Tristan, she never engaged, and the tensions were quickly snuffed out as reason and common sense prevailed. As best friends, Lane and Rory fought over cheerleading; Lorelai and Sookie fought over business decisions. Never did the tired trope of women competing with each other for male attention rear its hoary head.

While you can make the argument that it would be unlikely for a family-friendly show, as Gilmore Girls was designed to be, to portray women as victims, Gilmore Girls managed to cull pleny of drama from its character relationships without ever putting women in the position of having no agency over their lives.

The various aspects of Lorelai’s teen rebellion, including her pregnancy at age 16, were always framed as choices for which she bore sole responsibility. When Lane spends half the series deceiving her mother, the resulting calamitous fallout could easily be framed as an overbearing mother’s overreaction, but that doesn’t happen, and Lane doesn’t get off easily. Almost half a season is devoted to teaching Rory to own the consequences of her actions when she goes through her own rebellious phase in a later season.

And although the female characters on the show run into plenty of dramatic situations, they are never portrayed as objects of pity for the viewer. This is a rare thing, especially for family dramas, but it’s just one of the many ways in which Gilmore Girls refused to pigeonhole its female characters into cliched tropes which could disempower them.

4) The Asian parent never pressures her daughter to be an academic overachiever.

Lane’s relationship with her mother was one of the first complex Korean family relationships on television, and while later the stereotype of the “Tiger Mom” would typify some of the traits that Mrs. Kim embodied, there were many more that she sidestepped. A complex and caring mother, Mrs. Kim had strict rules for her daughter, but they had more to do with the devout Christianity common to many Korean-American families than with the stereotypical academic pressure most Hollywood Asian-American parents put on their fictional children. And while Mrs. Kim was a rigid parent in many ways, she almost always accepted her daughter. The most notable example was the episode where she signified her acceptance of Lane’s rock-loving ways by writing her a rock song.

It’s also important to note that Mrs. Kim’s choices as a parent were never shamed or undermined. When Lorelai tried early on to give her parenting advice, Mrs. Kim politely but firmly refuted it and stood by her choices. Lane was largely respectful of her mother’s decisions and rules for her life—and so, too, was the narrative of the show.

5) Fat women are never made the brunt of jokes or the subject of plot points revolving around their appearance.

This point remains one of the most important and astonishing for me. Not only did Gilmore Girls have a cast which featured multiple women of size, a feat almost unheard of for series even today, it always portrayed those women as amazing, sexy, and confident characters who were vital to the mythos of Stars Hollow.

Babette was not only played by the uncontestably awesome Sally Struthers, but she was married to a hot jazz musician who clearly doted on her. If we’re to believe her oft-discussed backstory, and there’s no reason why we shouldn’t, Miss Patty was an accomplished dancer who performed around the world, with a string of lovers in every port. Her love of gossip and flirting were shown as over the top, but they never turned her into the brunt of a joke.

As for Sookie, though Melissa McCarthy is better known now for rougher comedic roles, her stint on the Gilmore Girls was characterized by the humorous paradox of her gentle good nature contrasted with her professional perfectionism as a high-end chef. She’s not only portrayed as sexual, her relationships and self-esteem are arguably the healthiest on the show.

In an early episode, Lorelai confronts Sookie about her lack of recent dating experience. There’s a brief moment in which the viewer might expect this to become an implicit comment on Sookie’s inability to find dates because of her size; instead, Sookie responds that she’s been so wrapped up in her job that she hasn’t chosen to make the time. Later she asks Jackson out on a date. Sookie not only gets to be a complex character, she has total agency over her dating life.

6) No woman is ever worn down into saying “yes” to a relationship.

One of the reasons Luke and Lorelai’s relationship proceeded as slowly as it did is that it evaded many of the typical rom-com cliches: not only did they never have a meet-cute, Luke never actively pursued her or spent years pining over her. When Lorelai dated Max, after some initial dithering, she initiated almost every major decision of their relationship: she decided when it ended, she decided when it started again, and she decided when to call it off for good.

As for Rory, when Tristan pursued her in the first season, she was adamant in saying no, and this was never taken as a sign that she was secretly sexually attracted to him. And while Logan and Jess both undoubtedly emotionally manipulate Rory in their various ways, she initiates both relationships, and just as cleanly walks away from them both in the end.

7) Women are never shamed for having sex.

Lorelai’s teen pregnancy served as the foundation for most of the dysfunction that the show is built on. But while her parents are obviously still not over it, they never shame Lorelai for having teen sex, but for refusing to get married to Rory’s father. Meanwhile Rory’s big moment with Dean becomes an issue, not because she had sex, but because of the context in which it happened. The relationship between sex and womanhood in the Gilmore Girls universe is complicated and occasionally messy, but it’s never something that causes regret or necessitates punishment.

If it seems inconsequential that Gilmore Girls managed to sidestep each of these tropes, think of all the other “quality” shows on television that didn’t. Even shows that have come after it and which bear its influence, from  to the entire lineup of successful ABC Family series, have fallen into many of these trope traps repeatedly.