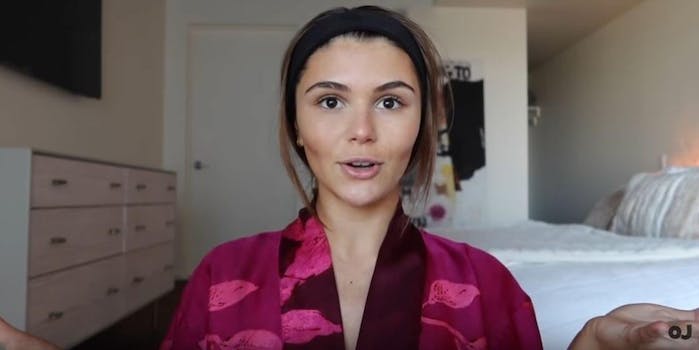 Will Olivia Jade have to testify against her mother, Lori Loughlin, in bribery trial?

She could be a 'star witness' for the government.

YouTube star Olivia Jade—whose mother Lori Loughlin is facing a trial for her alleged role in a college admissions scandal—reportedly might have to testify against her mom.

According to US Weekly, Olivia Jade Giannulli and her older sister Bella Rose Giannulli could be called to the stand if Loughlin, best known for her role as Aunt Becky in Full House, doesn’t change her plea to guilty.

Loughlin and her husband, Mossimo Giannulli, have been charged with fraud, money laundering, and bribery for allegedly paying $500,000 to get their daughters into the University of Southern California as rowing team recruits even though neither were involved with the sport. The parents have both pleaded not guilty.

But the pressure has apparently been amped up on the defendants and potentially on Olivia Jade, who lost a deal with makeup giant Sephora because of the controversy despite the fact she has nearly 2 million YouTube subscribers and 1.3 million Instagram followers.

“Lori has been told by the legal team that the United States Attorney’s Office will use her daughters as star witnesses in hopes of securing a conviction,” a source told US Weekly. Loughlin apparently asked if it’d be possible for her daughters not to be forced to testify, and “she was told there wasn’t unless there was a change from not guilty to guilty. Accepting a plea bargain would be the only solution.”

When the scandal, which is termed Varsity Blues, broke last year, Olivia Jade left school and mostly stopped posting her beauty vlogs and makeup tutorials to YouTube. In December, she uploaded a two-minute video where she said she was not allowed to discuss the case involving her parents. Considering she hadn’t posted in nine months, she said she wasn’t even sure she wanted to continue with her vlogging career.

“This is the best I can do and I want to move on with my life,” she said in the video. “It’s so hard because I’m not trying to make this about me or how I’ve been because that’s not the point of this. Though I’m terrified to make this video and to come back, I know that I also want to start taking smaller steps in the right direction.”

“The moral of the story is, I’ve missed you guys so much,” she continued. “I’m just really excited to start filming again and to start uploading and I really hope you enjoy the vlog.”

She posted a makeup video a few weeks later in mid-December, but since then, she’s gone silent on her YouTube channel.

“Olivia’s lawyer is providing counsel as to what content and topics Olivia can safely discuss,” a source told US in December. “Prosecutors could ask Olivia about her decision to return to social media.”

If Loughlin is convicted on all charges, she reportedly could face up to 45 years in prison.