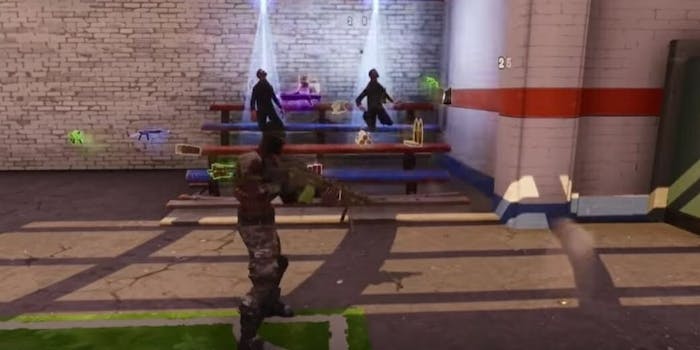 Childish Gambino’s ‘This Is America’ works perfectly in ‘Fortnite’

If you like Childish Gambino and Fortnite, this is the video for you.

Childish Gambino’s “This Is America” continues to reverberate around the internet with its startling video that highlights the country’s problems with gun violence and police brutality. Now, it’s been combined with another enormously popular online trend to create a parody that, although it isn’t adding to the important discussion Childish Gambino wants to have, people are still loving.

The WiziBlimp YouTube channel reimagined Childish Gambino’s video if it was set in the world of Fortnite, the battle royale game that’s been exploding across the internet for the past several months.

The result is a video called “This Is Fortnite,” and no matter what you think about parodies of Childish Gambino’s original piece, the Fortnite video’s accuracy is impressive (especially when it comes to Donald Glover’s dancing and how the camera pans from scene to scene).

The video has clearly resonated with fans of Childish Gambino and Fortnite (or both). WiziBlimp has slightly more than 1,000 YouTube subscribers, and as of this writing, the video had more than 135,000 views.

According to WiziBlimp, it took about five days of shooting to create the content, and according to most of the YouTube commenters, it was well worth the effort. As one commenter noted, “I thought this was good until I played this and the [original] video side by side, and realized it’s beyond good. The attention to detail with every dance move and camera angles is amazing. Well done.”

Even the Fortnite community on Reddit was impressed. Wrote one redditor:“I’m absolutely blown away at how closely (within realm of possibility) that you followed the original video. Just the effort put forth into replicating every aspect as closely as you did is astonishing. Not disappointed I watched this at all.”

It’s hard to argue with that.