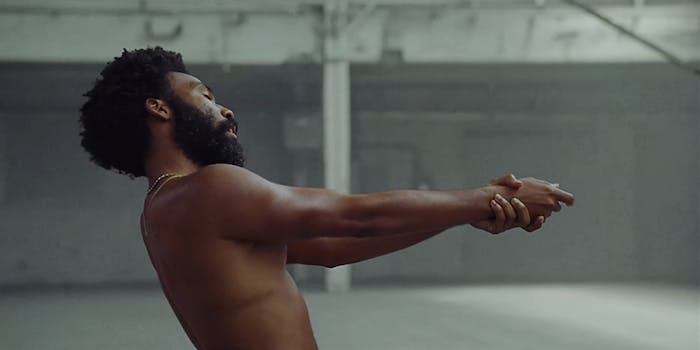 Childish Gambino surveys a distracted country in ‘This Is America’

Donald Glover dropped a new video for everyone to unpack.

As Donald Glover, aka Childish Gambino, was performing his second song on Saturday Night Live this weekend, he was revealing a new video for “This Is America” in real time.

Directed by Hiro Murai, who’s also a director on Glover’s FX series Atlanta, the video is something of a mirror of his SNL performance, though it goes much deeper on context and scope, especially in regards to police brutality and gun violence. Glover walks through a series of scenes filmed in a warehouse, and they change as the song’s tone does too. In one scene, Glover dances with a choir before spraying them with a machine gun, possibly a reference to the 2015 Charleston, South Carolina, church shooting.

Fans quickly got to work breaking down the imagery: the shootings, done by Glover; kids filming scenes of violence and rioting on phones; references to 19th-century folk art. As Glover says in the song: “This is a celly. That’s a tool.” It also touches on what we can be distracted by.

Guns are treated with more respect than human lives: the gun is carried off carefully by a nicely-dressed man, whereas the corpse is dragged off and immediately disregarded. pic.twitter.com/ZpZP12OkFy

Childish Gambino had me shook once I noticed this stance in his “this is America” video and the lyrics #BlackTwitter. #ThisIsAmerica pic.twitter.com/eeYfBpNzlk

Death riding the Pale white horse while he is followed by Hell (represented by police) going totally unnoticed because of dancing and pop culture in the foreground is the single greatest cinematic message I’ve seen in a music video to date. #ThisIsAmerica pic.twitter.com/DYaPjbvoym

And we can’t forget that SZA cameo.

The video’s many elements became fodder for object-labeling memes, too. And, ironically, obsessing over memes could be seen as one of the many distractions spelled out in “This Is America.”

I thought the ‘This Is America’ format could be improved. from MemeEconomy

A new song likely means a follow-up to 2016’s Awaken, My Love! is coming, and the This Is America tour kicks off in September. In the meantime, Glover has given fans a lot to chew on—at least according to the more than 18 million views the video has garnered.