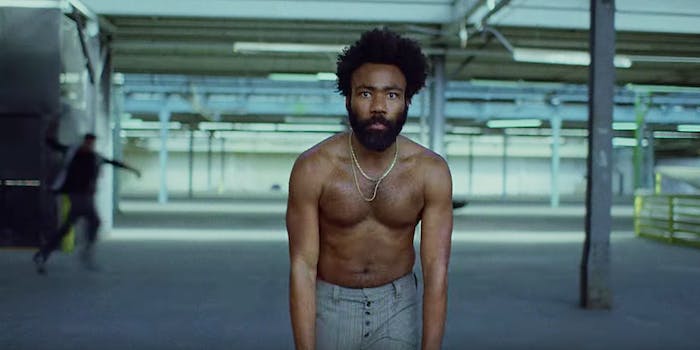 YouTuber mashes up ‘This Is America’ and ‘Call Me Maybe,’ because nothing is sacred anymore

It's tasteless, but it's also amazing how well the songs sync up.

Childish Gambino stunned the world when he dropped his “This Is America” video earlier this month. It hasn’t even been out a week yet and, predictably, the internet has already soiled it.

The video is a scalding meditation on racism and gun violence in America, set to the juxtaposed sounds of a choir singing and hard, bass-heavy trap beats. The video features Donald Glover’s disconcerting, albeit rhythmic, dancing. Dancing that, as YouTuber LOTI noticed, would fit remarkably well with modern pop songs.

Yes, that’s right: “This Is America, so Call Me Maybe” is a thing that now exists. It puts the new Gambino video to the tune of Jepsen’s chart-topping 2011 hit, and you should be appalled by its tastelessness. But, maybe, you should also be impressed by how fantastically well these two songs sync up?

Glover debuted the song when he performed on Saturday Night Live, and the video immediately made a huge splash. As the Daily Dot’s Audra Schroeder wrote, “Glover walks through a series of scenes filmed in a warehouse, and they change as the song’s tone does too. In one scene, Glover dances with a choir before spraying them with a machine gun, possibly a reference to the 2015 Charleston, South Carolina, church shooting.”

A song as instantly popular and riveting as “This Is America” was bound to become a meme sooner or later, but if you’re a YouTuber, maybe err on the side of caution with this one. You can watch the mash-up above, or you can just watch Childish Gambino’s original video—which has now surpassed 90 million views—here.