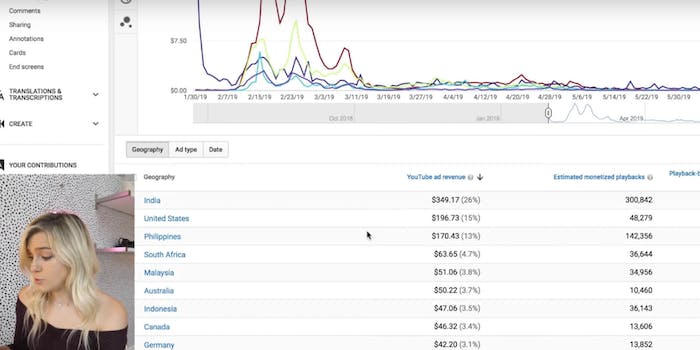 Monday afternoon, YouTube clarified what it meant by adding this section.

To clarify, the "commercially viable" section is not about terminating an account bc it’s not making money / not in YPP. It’s about discontinuing certain features or parts of the service bc they are outdated or have low usage. This does not impact creators or viewers in new ways.

Since the terms were announced, content creators—especially smaller creators who don’t have their channels monetized—have been worried that their accounts are doomed.

For a channel to become monetized, it must have at least 1,000 subscribers and 4,000 watch hours within a 12-month period.

So according to Youtube’s new Terms of Service, if your channel isn’t making them enough money, they’ll just terminate it.

To all of the smaller content creators out there, it was nice knowing ya.

A friend of mine said that one day YouTube will collapse.

if you're a small creator who is just trying to do things to stay afloat/find a small audience for the creative things you do: these platforms don't care about you. and they can't wait to kick you off.

YouTube has new Terms Of Service on December 10th. This basically says that if channels don't make enough money, THEY WILL POSSIBLY TERMINATE THEM!!!

Looks like I fought to the very end but now I may be close to losing my livelihood, losing my passion, my audience and my… pic.twitter.com/P74uQe8jpW

The “commercially viable” section of the terms have been interpreted in several different ways online.

In its current terms of service, YouTube reserves the right to delete an account for violating its copyright policies or community guidelines, which includes content that is sexually explicit, hateful, violent, harassing, or spam. However, YouTube already has an “inactive accounts policy” that allows it to delete accounts that have been inactive for at least six months, have never uploaded a video, or that are not actively watching or commenting on other videos.

A theory circulating on Reddit is that YouTube seeks to remove users who have been using the platform for free storage—uploading several private or unlisted videos rather than paying for a storage service, such as Google Drive. Another Reddit thread speculates that YouTube updated its terms to comply with the Federal Trade Commission’s (FTC) regulation as a result of a recent settlement. In September, YouTube was ordered to pay $170 million to the FTC and New York for violating child privacy laws.

With the new terms of service allowing channels not making a proft to be terminated, we need to take a stand. Google, Inc: Fire Susan Wojcicki as YouTube CEO – Sign the Petition! https://t.co/8EacbJOORx via @ChangeAUS

The petition, which claims that since Wojcicki became CEO in 2014 “things started [going] downhill,” has more than 56,000 signatures and has had a spike in support since YouTube’s new terms were announced.

TeamYouTube has been responding to several tweets from users who have interpreted the new terms as YouTube getting rid of content creators who don’t generate money.

We're working to clarify for everyone as they bring questions to us! Check out our reply to this tweet here: https://t.co/Iq7uTBxQOf