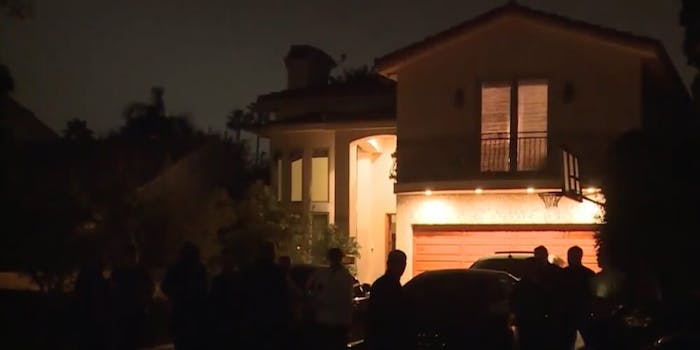 YouTube star may have been victim in violent home invasion

Five assailants broke into the L.A. home and made off with cash and jewelry.

YouTuber Spencer Elmer–who runs the channel Elmo Films–may have been the victim of a violent home invasion in Los Angeles, California.

The Los Angeles Police Department reported that a robbery occurred around 10am Thursday morning, involving up to five suspects. The assailants broke into the two-story home and tied up multiple victims before taking off with cash and jewelry.

“We heard this banging on the door, and it was one of the victims,” neighbor Craig Mayo, who witnessed the aftermath of the robbery, said. “He was tied up, had a tie around his wrist, in his underwear, scared, obviously, so we called the police.”

California reporter Jon Baird tweeted that Elmer may have been among those targeted in the crime.

“A popular #YouTuber (SpencerElmer, #ElmoFilms) may have been the target of a #HomeInvasion robbery here in #ShermanOaks last night. Victims were tied up. Police say the armed suspects got away with cash & jewelry,” Baird tweeted.

A popular #YouTuber (SpencerElmer, #ElmoFilms) may have been the target of a #HomeInvasion robbery here in #ShermanOaks last night. Victims were tied up. Police say the armed suspects got away with cash & jewelry. @KNX1070 pic.twitter.com/afiFEyfIsN

Gigi Graciette, another reporter that was on the scene of the crime, referred to the victims as “four, young YouTube stars,” but police have yet to release the identities of the victims, and Elmo Films has neither confirmed nor denied being involved.

Some do not believe that Elmer was the YouTuber involved in the crime because he apparently moved to the U.K. One fan on Twitter shared a screenshot of one the YouTuber’s recent videos with the caption, “Actually MOVING to London!” Elmer’s channel also states that he is currently located in the U.K.

He lives in the UK pic.twitter.com/KqdmBA8sN4

The Daily Dot has reached out to Elmo Films to confirm the reports but did not receive a response by publication time.

The suspects are still at large, and police have yet to release official descriptions.