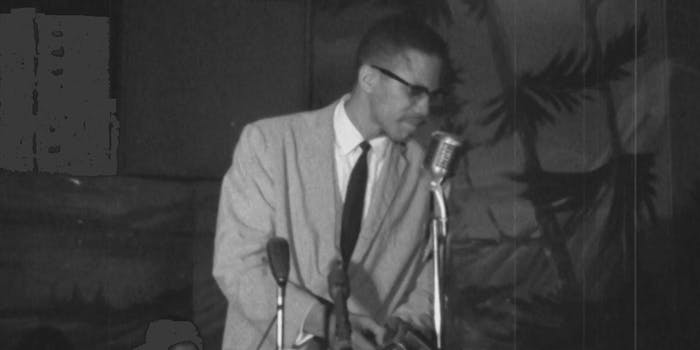 ‘Who Killed Malcolm X?’ illuminates explosive details in his assassination

The series begins a credible re-evaluation of the messy end of a critical figure whose outsized influence continues to be felt.

Netflix’s latest docuseries, the Fusion-produced Who Killed Malcolm X?, was just released Friday, Feb. 7. Within two days, the explosive six-episode series had provoked the New York district attorney’s office to take another look at the case–55 years after the Muslim minister and activist was assassinated in New York City. Though the series pertains to the circumstances of Malcolm X’s death, co-directors Phil Bertelsen and Rachel Dretzin pivot the show around the life’s work of self-educated investigator Abdur-Rahman Muhammad, the foremost historian of Malcolm X. Through Muhammad’s viewpoint, the elaborate scab-picking of the minister’s death uncovers leads not widely known to the public, illuminates the dirty tricks of the local and federal authorities, and puts an entire city in the crosshairs.

RELEASE DATE: Feb. 7, 2020
DIRECTORS: Phil Bertelsen and Rachel Dretzin
STREAMING: Netflix
An investigator’s work uncovers leads not widely known to the public, illuminates the dirty tricks of the local and federal authorities, and puts an entire city in the crosshairs.

Born Malcolm Little in Michigan, Malcolm would go on to change his last name to X, to signify the true African heritage denied to African-Americans since their arrival in chattel slavery. The former criminal found the teachings of Elijah Muhammad while in prison, and as a gifted orator, he would become the speartip of the Black religious/nationalist Nation of Islam (NOI), rising to the second position, only behind leader Elijah Muhammad.

He pushed the teachings of Muhammad and was ultimately seen as both a threat to the NOI’s hierarchy and—according to FBI director J. Edgar Hoover—a prime threat to national security (which is to say, a threat to white America). He remained a marked man until his demise—even after his nasty separation from the Nation.

The usual story goes that on Feb. 21, 1965, he prepared to address an audience at Manhattan’s Audubon Ballroom when an unusual commotion began in the 400-person audience. As Malcolm X and his bodyguards attempted to quiet the disturbance, a man with a sawed-off shotgun rushed forward and shot him once in the chest, as two other men rushed toward the dais firing semi-automatic handguns. The multiple buckshot wounds would end Malcolm’s life.

It’s widely acknowledged that his killers were NOI members and that a thorough investigation by NYPD or FBI wouldn’t be seriously considered. The latter point is hammered home by the fact that another scheduled event, a ball, was allowed to take place that evening, with no delay. In excerpts of a news report commemorating Malcolm’s assassination 20 years later, the dais where he stood—racked with bullet holes—had never left the then-abandoned building.

Who Killed Malcolm X? asserts that two men convicted of the crime alongside admitted assassin Talmadge Hayer—Norman 3X Butler and Thomas 15X Johnson—could not have been at the Audubon Ballroom that day. (Hayer signed a largely ignored affidavit saying as much.) Muhammad’s hard-earned discoveries coming to light exposes procedural inconsistencies and potential, overlapping coverups (including the FBI’s COINTELPRO program) that scream conspiracy at every turn.

While the series does ultimately catch up to the alleged killer—William X. Bradley, or Al-Mustafa Shabazz—that doesn’t end up being the point, further illuminating the greatness of the series. Eventually, Muhammad turns his investigative focus to Shabazz’s shining reputation in Newark, New Jersey, home of Mosque No. 25, attended by Hayer and the other (uninvestigated) assailants he later named, including Bradley/Shabazz. He meets pushback in Newark: Residents ask the well-meaning Muhammad to stop pursuing Shabazz. Newark Mayor Ras Baraka concedes to hearing rumors that Shabazz was the “shotgun dude.” Other officials, including Sen. Cory Booker, know Shabazz personally and appear to be holding to a code.

Muhammad’s questioning and his pursuit of justice for the slain minister, though, also show a considerable blind spot in his reasoning, which slowly becomes the center of the series. Some of his interviewees talk about Shabazz as worthy of salvation. A shining beacon within the Newark community, he appeared to be righting whatever wrongs he’d made before his death in 2018. Muhammad, however, cannot understand why the Black Muslim community cradled a man they know to be a killer. The answers lie in ideas of loyalty and the extremely gray 11 months between Malcolm X’s separation from the Nation of Islam and his death.

In that time, in the bulk of 1964, Malcolm X had made the hajj, his pilgrimage to the holy city of Mecca, in Saudi Arabia. It was a fundamentally life-altering event that would change his views on Islam, to the extent that he converted to Sunni Islam. He also became a world leader, effectively serving at the voice of Black America abroad—which could not have sat well with Elijah Muhammad or the FBI.

Shabazz also completed this pilgrimage, effectively wiping away his sins, including previous crimes of murder and sexual assault and seemingly even the fact that his decisions negatively altered the lives (and generations) of two innocent men in Butler or Johnson.

The definitive difference that Muhammad, the investigator, seems to not fully grasp, and what Shabazz’s supporters dare not say in the light of the slain man’s deification: Malcolm X was broadly viewed as a traitor to the Nation of Islam and exposer of the Elijah Muhammad’s transgressions. Whatever sins Shabazz had collected in the course of retribution ultimately became collateral damage when compared to treason. Thus, Malcolm was not granted the same redemption, as he was in opposition to Elijah Muhammad, a man considered favored by Allah. Shabazz was simply, forcefully, doing God’s work.

Even with its flaws and omissions—quite notably, Nation of Islam leader Minister Louis Farrakhan wasn’t mentioned at any point in the film—Who Killed Malcolm X? is masterfully nuanced work about a man’s quest for righteousness. Whether or not any authority reopens the case, the series begins a credible re-evaluation of the messy end of a critical figure whose outsized influence continues to be felt.