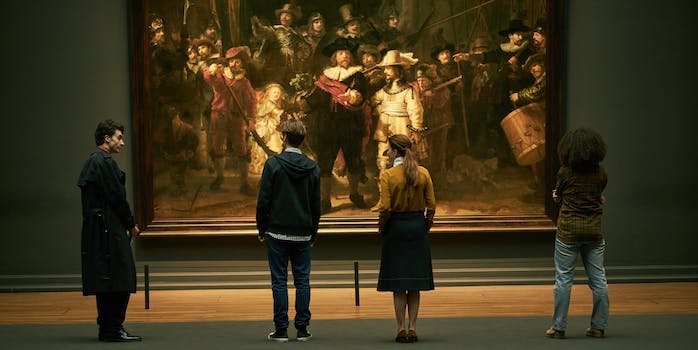 The Dutch series follows a secret society of university students.

In the first episode of Ares, Netflix’s latest horror series, a group of university students visit Amsterdam’s Rijksmuseum after hours to view the great paintings of the Dutch Golden Age. After passing seascapes and model ships, they stop in front of Rembrandt van Rijn’s “The Night Watch,” the artist’s largest painting and the crown jewel of the museum. The painting, which was commissioned in the mid-seventeenth century by members of Amsterdam’s local militia, depicts a cheery band of heroes ready to defend their city. The university students treat the painting like an old friend: “There they are,” one says fondly: “Our great-great-grandfathers.” He is not speaking metaphorically: he and his friends go on to point out their ancestors in the painting, one by one.

Rosa Steenwijk (Jade Olieberg), a mixed-race friend of one of the club’s novice entrants, watches them silently, unable to contribute a storied family legacy of her own. She soon learns that these scions of most storied families in the history of the Netherlands all belong to an elite and exclusive social club called Ares. Despite her unremarkable pedigree, Rosa is invited to join. She soon discovers that novices must go through hazing rituals, allow themselves to be branded with the club’s seal, and move into the club’s palatial townhouse. Novices also wear new clothes, provided to them by Ares, which evoke the Golden Age paintings on display in the Rijksmuseum. Though these outfits are thoroughly modern and chic, their modest cuts, structured sleeves, and ruffed and fallen collars recall the clothing on display in the paintings of the era. These clothes come in royal blue, yellow, and white to black—exactly the color palette that Johannes Vermeer, the Dutch Golden Age’s second-most celebrated painter, favored.

The legacy of this dominant era of Dutch history and culture ripples through Ares, and Ares. “Did you never wonder how it was possible that a small country like the Netherlands became so rich and powerful?” Carmen (Lisa Smit), the daughter of the club’s head member, asks Rosa. The answer, in the world of the show, is Ares, which has its roots in the country’s seventeenth-century Golden Age. While the Netherlands remains prosperous today, due in large part to its robust production of natural gas, its global influence has declined considerably from its peak during its Golden Age, when its colonial empire spanned the globe from Brazil to South Africa to Indonesia, and it maintained exclusive trading rights with Japan. Like other ex-empire states, including the United Kingdom, the Netherlands is still reckoning—or, in this show, failing to reckon—with its colonial legacy and its diminished status as a player on the world stage. The white characters in Ares revel not only in the elite access and privilege that their membership in Ares affords them, but also in their long family histories of prosperity and power. When they point out their ancestors in Rembrandt’s painting, they are not merely commenting on a historical coincidence but affirming their rightful place in their country’s elite class.

Rosa, whose mother is white and father is black, and who comes from a middle-class background, does share this worldview, but when she is invited to join Ares, she leaps at the opportunity. Though most of her fellow novices are skeptical of her presence, she quickly attracts the attention of Carmen’s father Maurits (Hans Kesting) when she gracefully covers up the suicide of Ares’ young president. The club is soon beset by a rash of suicides, seemingly connected to a mysterious, soul-eating being rumored to live beneath the townhouse, to which members make offerings in the form of theatrically slimy black vomit. It soon becomes clear that Maurits has high hopes for Rosa—and that ascending high in the club’s ranks may require more sacrifices than she is willing to make.

Ares, unfortunately, has a stronger grasp on metaphor and style than on character and plot. Creators Pieter Kuijpers, Iris Otten, and Sander van Meurs carefully unspool the show’s thematic subtext, but they devote less care to writing their central characters with empathy and psychological rigor. At eight episodes ranging from 24 to 32 minutes, this show is a quick, entertaining watch, but its story would likely have been better served through a tighter, stylized horror film or a longer series with more time to devote to in-depth character work. Crucially, Rosa’s urgent desire to join Ares never fully makes sense. While the other novices seem to have prepared to be initiated into the club, Rosa is thrown into the surreal and upsetting initiation ceremony immediately. Given how little she knows about the organization, the idea that she would be eager to join after being abducted, surrounded by masked and robed figures, and asked to allow herself to be branded strains credulity. And yet she dives in with enthusiasm.

The metaphorical appeal of Ares is, of course, straightforward: its members are the wealthy white elite who have controlled the country for centuries; access to that kind of power is enviable. But the narrative is not a vehicle for metaphor: character comes first. Rosa simply never makes sense, despite Olieberg’s appealing performance. First presented as a devoted daughter, she quickly becomes implausibly neglectful. Her mother, who suffers from psychosis, attempts suicide on the night that Rosa joins Ares. Even after Rosa hears what has happened, she chooses to stay at the club’s townhouse, and only visits her mother when doing so is convenient for the plot. The other characters are similarly poorly defined. Rosa’s friend Jacob (Tobias Kersloot), who discourages her from joining the club, mistrusts Ares from the start, but the show never explains why, and their friendship is superficial at best. The other characters in the club are one-dimensional, if not purely decorative.

The show is more interested in style. It is a chic little program, featuring moody lighting, a dreamy techno score, attractive young actors, and gleefully stylized gore. Watching it inevitably conjures a host of associations with other media, from Riverdale to The Secret History to Eyes Wide Shut to Suspiria. For most of its run time, it amounts to a well-crafted, modestly diverting piece of entertainment that should have been better. Films can rely heavily on mood and style at the expense of plausible characterization, but serialized television requires compelling characters to fully succeed. Without that crucial component, Ares can only achieve limited success.

But the show culminates in a bravura finale that justifies watching the earlier, less successful episodes, even if it does not retrospectively correct the show’s subpar screenwriting. When Rosa finally penetrates the highest ranks of Ares, and learns what really lies beneath the club’s townhouse, the show transforms into a different, more elevated work of art. In Ares’ climactic set piece, the show literalizes its thematic ideas without fully removing them from the realm of metaphor. The surreal nightmare that results is visually arresting and viscerally affecting. The privileged young men and woman gazing at “The Night Watch” in the show’s first episode believed that they saw their ancestors in the painting’s cheery, heroic militiamen. But as Ares ultimately concludes, Rembrandt’s vision of homespun Dutch heroism is a fantasy, providing cover for a darker, more toxic reality that will stay hidden in the shadows until someone is willing to drag it out into the light.