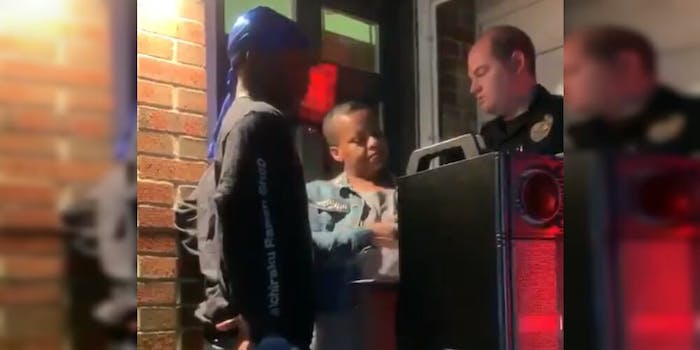 They searched her house and seized numerous electronics.

A Black woman in North Carolina is going to court after police raided her home at night and took her electronics after a complaint that she was playing Malcolm X speeches too loudly in the afternoon.

According to INDY Week, police arrived at Mikisa Thompson’s house in Garner at 10pm and ordered the whole family out of the house, while at least half a dozen officers stood by and others blocked off the street. They reportedly read the search warrant to her, then scoured the house, taking two laptops, a computer monitor, seven iPhones, computer speakers, an alarm clock, and charging cables. Thompson was then given the summons to appear in court on June 24 for her class-three-misdemeanor: violating the town’s noise ordinance, which carries the maximum penalty of a $500 fine.

It’s already wild enough to seize thousands of dollars worth of electronics over a misdemeanor noise complaint, but the details make the officers’ actions appear even worse. Although they conducted the raid at night, they had actually been called in the early afternoon. The call came from her 65-year-old neighbor, Don Barnette, who complained that she was loudly playing speeches with “Islamic Jihadist-type messages.” Thompson was, in fact, playing speeches by Malcolm X and Angela Davis.

Thompson’s lawyer, T. Greg Doucette, told INDY that a night raid such as this is the “type of overkill that’s intentionally designed to terrorize and punish people, not to actually do what’s necessary for enforcing the case.” Doucette pointed out that many of the electronics seized couldn’t make the noise Barnette complained about, such as an alarm clock and all of the family’s iPhones. According to Doucette, the purpose is not an investigation, but “to make their lives harder to make sure they had no way of communicating with anyone.”

This is the second time police have seized Thompson’s property over a noise complaint from Barnette about Malcolm X speeches. In April they took a stereo, which has still not been returned to Thompson.