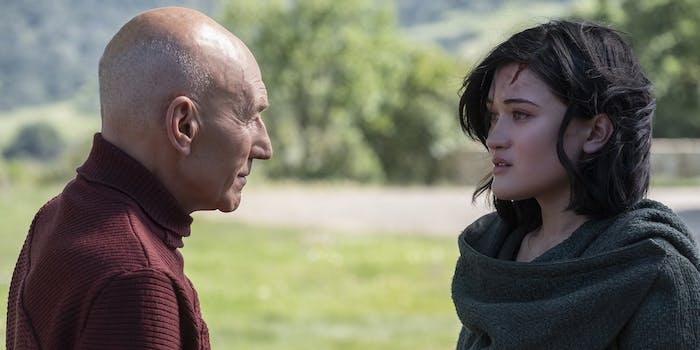 This recap includes spoilers. Click here for our spoiler-free review.

“You’re a stranger to history,” Picard tells a smirking journalist in Star Trek: Picard’s first episode, his voice rough with anger. “You’re a stranger to war.” In a different franchise revival, this would be a grizzled old hero putting a naive whippersnapper in their place. With Picard, the dynamic is rather different. The 92-year-old Starfleet admiral is the more compassionate and progressive figure in this argument, disgusted by Starfleet’s choice to abandon Romulan refugees 14 years ago, when their homeworld was destroyed. Instead, Starfleet focused its resources on Mars, where “rogue synthetics” (aka androids) attacked a human colony. Soon after, the Federation banned all synthetic lifeforms. Interviewing Picard on the anniversary of this tragedy, the reporter pushes back against his belief that alien lives are equal to humans. Once, this philosophy was a defining trait of Starfleet’s ethos.

Jean-Luc Picard has softened with age, but he hasn’t lost his backbone. Weighed down by grief and regret, his deep reserves of empathy come to the foreground. Gone are the clipped tones of command, replaced by a new emotional vulnerability—and emotional intensity, on display during that volatile interview scene. He’s disgusted by the Federation’s lapse into bigotry and fear.

Without a partner or children to share his retirement, Picard’s domestic life echoes his time as a starship captain, supported by a pair of loyal subordinates (Laris and Zhaban) who act like the command crew of his family vineyard. Set 20 years after his last appearance in Star Trek: Nemesis, the show opens with a dream sequence featuring Commander Data (Brent Spiner), drawing a thematic link between his death and the twin disasters of Romulus and Mars.

Showrunner Michael Chabon recently compared Picard to Sherlock Holmes, whose quiet retirement didn’t really feel like a plausible happy ending. Picard isn’t suited to a peaceful lifestyle; he wants to make a difference in the universe. He only retired because he cut ties with Starfleet, creating a different power dynamic to his role in The Next Generation. Picard is still the voice of authority to us, the audience, but to Starfleet, he’s an unwanted rebel. Not in the temporary sense of all those Star Trek episodes where captains disobey bad orders, but representing a deep ideological divide. As an institution, is Starfleet worth fighting for at all?

Star Trek’s future always reflected our own present, and Picard explores how the liberal establishment of The Next Generation gave way to a bigoted government with no room for inclusivity and compassion. It’s a political thriller about refugees and people who the state classifies as “illegal.” If Data was still alive, he would’ve been one of them. The ban on synthetic lifeforms is a predictable continuation of something we saw in earlier series: the laws against genetically enhanced people like Julian Bashir in Deep Space Nine. In turn, the synthetic ban goes hand-in-hand with academic censorship. When Picard meets with AI specialist Agnes Jurati (Alison Pill), her laboratory is a ghost town. She’s forbidden from continuing her research, showing Picard a container where she keeps the inert body of B-4, Data’s prototype “brother.” Data, it turns out, really was the last known example of true artificial intelligence. Picard remembers him as a dear friend and a hero, but Starfleet would prefer to pretend he never existed.

It makes sense to bring back Brent Spiner, one of the strongest performers in the Next Generation cast. Without actually resurrecting Data, Star Trek: Picard reframes his ignominious demise in Nemesis, the worst film in the franchise. His ghost is an important figure, tying into the Federation’s increasingly regressive politics, and Picard’s new mission. But I’m getting ahead of myself here.

The show will introduce its main cast gradually over the next few episodes, beginning with Dahj (Isa Briones) this week. She’s the second most important character after Picard—or rather, her identical twin is, because Dahj is a genuinely shocking fake-out, dying before the end of episode 1. Her twin, Soji, only appears in the final five minutes.

When we first meet Dahj, she’s on a perfectly normal date. Then masked assassins break into her apartment, kill her boyfriend, and try to kidnap her… at which point she springs into a flurry of lethal combat moves, taking them out in seconds. As I said in my spoiler-free review, this initially feels like an old Joss Whedon maneuver: a young woman with powers she doesn’t understand, triggered by some kind of amnesia or brainwashing. Terrified and confused, she happens to see Picard’s interview on TV, and suddenly she knows she must go to him for help. Even if she doesn’t understand why. Neither does Picard, until he has another dream about Data, reminding him of a pair of paintings his old friend gave him decades ago. One is hanging in Picard’s house, and the other is in storage: a painting of a young woman who looks exactly like Dahj, titled “Daughter.”

In one of the most powerful scenes of the episode, Picard tells Dahj about her true origins. Conscious of the widespread mistrust of androids, he begins by setting out all the things he loved about Data: his bravery, his friendship, his love of art. Breaking down in tears, Dahj argues that she has memories of an entire life. It can’t possibly be true that she’s not real. “Have you ever considered the possibility that you are something lovingly and deliberately created?” asks Picard, fixing her with his gaze as if he could cure heartbreak through eye-contact alone. “If you are who I think you are, then you’re dear to me in ways you can’t understand.”

Captain Picard was known for his persuasive monologues, and here we see that power directed at one individual, with more passion and vulnerability than we saw at the helm of a starship. Not only does he understand the urgency of reaching Dahj in this moment, but she’s an unexpected lifeline to a long-dead friend. A daughter who couldn’t possibly exist, but does. But within minutes of this conversation, she’s dead, assassinated by another squad of masked goons. They’re Romulans.

Romulans have been around since 1960s Star Trek, introduced as Cold War adversaries during a kind of submarine episode. While the Klingons developed into a kind of viking/samurai culture of ritualistic warriors, the Romulans weren’t as complex—partly because none of the spinoffs featured a Romulan among the main cast. Genetically similar to Vulcans, they’re portrayed as a proudly militaristic and secretive culture, taking inspiration from Soviet spy dramas and (obviously) the Roman Empire. I love Romulans because they’re a bunch of melodramatic goths, but I’d be the first to admit they’re not very sophisticated in terms of worldbuilding. Star Trek: Picard is already changing that, beginning with Picard’s two Romulan refugee housekeepers, Laris (Orla Brady) and Zhaban (Jamie McShane).

Laris and Zhaban seemingly owe their lives to Picard’s work during the Romulan relief effort, now living comfortably on his family estate. Things are undoubtedly different for other Romulans, however. Considering what happened 14 years ago, Romulan survivors have plenty of reasons to hate the Federation. But why do a group of them want to capture Dahj, specifically? Why do they want to control the last living example of artificial humanoid intelligence?

We may find some clues with Dahj’s sister Soji. For the final scene, we cut to the “Romulan Reclamation Site,” which is, in fact… a Borg Cube. A former Borg Cube that’s being “reclaimed” by a primarily Romulan force, but with human (presumably Federation) individuals also involved. We meet Soji alongside one of my favorite new characters: Narek, played by Harry Treadaway. With typical Romulan panache, he emerges from a cloud of smoke, striding in slow-motion through the Borg Cube to make a surprisingly diffident introduction to Soji, like an emo Ben Whishaw. He’s interested in her research. He compliments her jewelry. He mentions the death of his brother while subtly blinking a tear from his eye. “I’m sorry, you spend your day fixing broken people,” he says winsomely, hinting that Soji has some kind of therapeutic role on the Borg Cube. “I’m guessing the last thing you want when you get off work is listen to another sad story.”

“Guess again,” says Soji, because he’s cute. Although as a longtime Star Trek viewer, I’m automatically suspicious of a Romulan who a) opens a conversation by revealing his soft underbelly to a total stranger, and b) mentions the “very unexpected” death of his brother, without specifying how that death took place. For now, though, that feels less relevant than whatever Soji is doing on a Borg Cube, and whether she’s safe from whoever killed her sister. Is she, like Dahj, totally unaware of her true heritage? Is it safe for her to be surrounded by Borg technology? Just a couple of questions I hope to discuss in next week’s recap, arriving on Jan. 30.

How to stream ‘Star Trek: Picard’