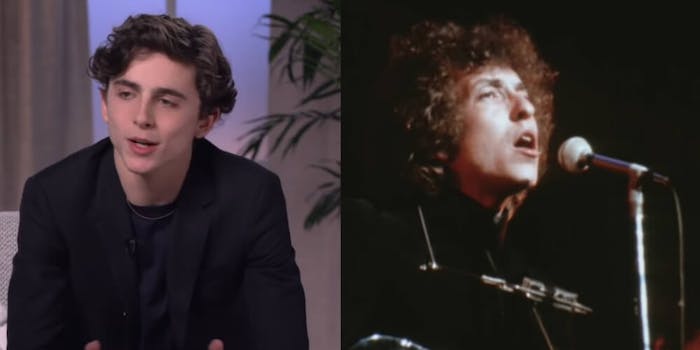 'We stan Bob Dylan, and we stan Timothée Chalamet. Bring it on bitch.'

“We stan Bob Dylan and we stan Timothée Chalamet, bring it on bitch,” Twitter user @glitterglam wrote, alongside pictures of Dylan and Chalamet.

2017 was a breakout year for Chalamet; he starred in Call Me By Your Name and Ladybird, becoming somewhat of an overnight sensation. Fans immediately fell in love with his tousled hair and a jawline Man Repeller claims is “rendered by Bernini’s own chisel.” More recently Chalamet gave a memorable performance as Laurie in Greta Gerwig’s Little Women and will appear in both Dune and The French Dispatch in 2020.

Fans are sharing their excitement online. “If you need an extra to be in the Bob Dylan biopic just standing there in the background please let me know I am free,” Twitter user @cosmichalamet wrote.

Chalamet has reportedly been taking guitar lessons, according to Deadline, so fans may get to hear him on the movie’s soundtrack.

not a massive fan of timothee chalamet playing bob dylan but people asking ‘can he sing?’ bitch can bob dylan??

Though many are excited about Chalamet’s prospective performance, some have concerns. Namely: Is Chalamet too pretty to play Dylan?

“Young Dylan was cute, but Chalamet’s jawline could slit your throat with the precision of a Miyabi Hibana knife set,” Jezebel’s Maria Sherman writes.

yall’s little prince timothee chalamet is far too pretty to play bob dylan. like that’s a casting choice that bob dylan would make and everyone who knows him would be like ‘mm really bob do you really think that’s what you look like’ and he’d cry

Nevertheless, Mangold’s final result is highly anticipated. Filming is expected to begin later this year, according to Deadline, but a final release date has not yet been announced.