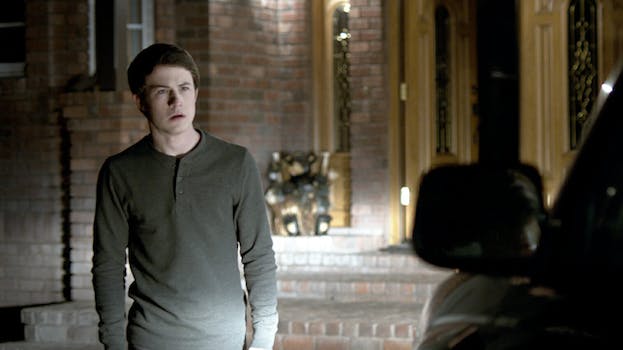 Don’t go into ‘The Open House’

“Have you ever thought about how weird open houses are?” asks Logan, the main character in Netflix’s The Open House. “I mean, you give your keys to someone you hardly know, and they stay in one room and welcome in a bunch of strangers. And those people just roam around the house. And the realtor doesn’t check the house when it’s done, right, they just turn the lights off and go?”

This monologue states the premise of the film, explicitly telling the audience why they should find it scary. And to writer/directors’ Matt Angel and Suzanne Coote’s credit, they’re not wrong. Open houses are kind of creepy, and there is a good horror movie somewhere within this idea. But it’s not this one.

The Open House, a prime and in this case understandable example of Netflix’s “dump it and see what happens strategy,” stars Dylan Minnette (13 Reasons Why) and Piercey Dalton as a mother and son who move into a friend’s mountain home when they can’t afford their rent following a family tragedy. Unexplained and eerie stuff follows and boils to a gruesome ending.

It’s a perfect example of a story which looks good on paper but amounts to nothing when filmed. The movie is essentially a two-hander, shared between Minnette’s Dylan and Dalton’s Naomi. There’s something interesting to the dynamic of a mother and son in this situation which you rarely see on-screen, but The Open House never explores it beyond the obvious. Minnette is serviceable as the same type of everyman/cookie-cutter teen he played in 13 Reasons and other shows like Scandal and Lost before that—his character is just duller this time. Dalton, a fresh face in indie film, is good but also suffers from underdeveloped characterization.

The movie is weighed down by an annoying kind of showy screenwriting which is easy to spot if you’re paying the slightest bit of attention. As soon as we see that Logan is a runner at the beginning, we know that this is going to come back later in the movie. The detail that he wears contacts is slightly less on the nose, but the direction is obvious enough that when we see him going through his nightly routine, we know it’s going to come into play later.

The Open House isn’t brought down by small flaws, however, but by one giant, 90-minute failure in execution. The term “slow burn” is a controversial one in horror. To some, it denotes the necessity for patience; to others, it suggests that most audiences have none. A third group might see these words and simply read “snoozefest.” Yet when done right, slow burners can be among the most effective horror movies. Well-known examples in recent years include The Strangers and The House of the Devil, two films which both feel like they had an influence on The Open House.

The key part of a slow burn horror movie is that when the scares do come they must be worth the anticipation of waiting for them. This is where The Open House falls completely flat. Not only does the movie wait to get truly scary until the last 20 minutes, it barely builds tension at all leading up to the climax. When the big showdown the audience knows is coming does finally arrive, it both fails to live up to the hype and makes the rest of the movie look worse by comparison. Again, this all might’ve been a much easier sell on the page. There’s enough mystery in the movie to keep a reader going until the end, and anything with few characters and fewer locations helps entice executives with the promise of a small budget. But I could hardly keep my eyes open watching The Open House, and that’s including when the movie got to its big payoff. If it weren’t for the creepy music, parts of this film would play better as a domestic drama than as a horror movie. As it is, this movie doesn’t contain moments thrilling enough to merit an entire feature. It could’ve been an excellent short film, instead, it’s painfully tedious.

The ending of the movie also involves some brutal violence which is similarly unearned, especially when you compare it to the subdued atmosphere it languishes in for most of its running time. The finale is surprisingly bleak. Minnette himself starred in the far better Don’t Breathe from 2016, a horror film which takes several disturbing turns. But the nihilistic carnage in The Open House isn’t shocking or particularly scary. The final coda is both predictable and maybe the best part of the movie. It’s possible the film could have actually been greenlit on the strength of its last image alone, taking a, “we’ll fix the rest of the problems later” attitude. But alas, it’s much too little, much too late.