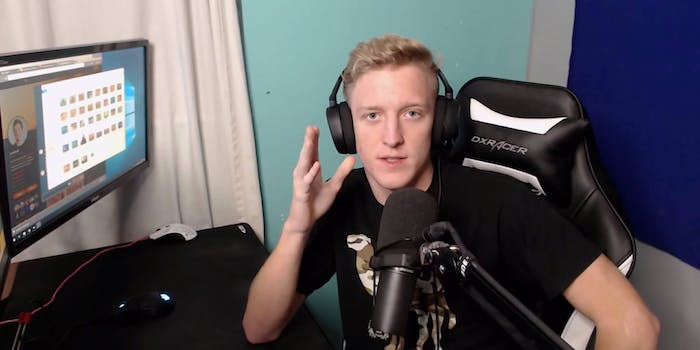 Will Twitch take any action?

Streaming star Tfue appeared to use a racial slur while broadcasting earlier this week, but so far, Twitch hasn’t taken any action against the Fortnite streamer.

During a stream on Tuesday, Tfue—whose real name is Turner Tenney—was playing Minecraft when he appeared to blurt out, “You guys fucking killed all the villagers, man. Y’all motherfuckers killed them [N-word]. You can suck my pee pee, man.”

But as of Thursday morning, his Twitch page, which is followed by nearly 7 million people, is still active. Tenney deleted the offending video, and at this point, it doesn’t appear that he’s going to be punished for his potential violation of Twitch’s guidelines.

Twitch doesn’t comment on individual streamers and declined to comment on this particular matter to the Verge.

Tenney, though, has been punished for his use of a racial slur before. In 2018, Twitch banned him for 30 days after he said “Where did this c**n go?” during a stream. He was later banned again, and though it was unclear what exactly he had done, he was punished, in his own words, “for just some stupid, stupid stuff that I did.”

Since it appears Tenney—who recently sued FaZe Clan over a contract dispute—will remain unscathed for this incident, it’s fair for others to wonder why he’s avoiding punishment while they faced a ban for something similar.

Pink Ward was given a 30-day ban in June after Twitch determined he had used a racial slur—Pink Ward was adamant he had said the word “yikers”—and a month before that, Alfie faced a 24-hour ban when a viewer used the N-word in a text-to-speech message while donating.

Tenney, though, has been punished before, and he potentially could be facing a long-lasting (or even a permanent ban) for yet another violation. So far, though, that hasn’t happened, and it appears Twitch is content to keep him on its platform without any kind of punishment.