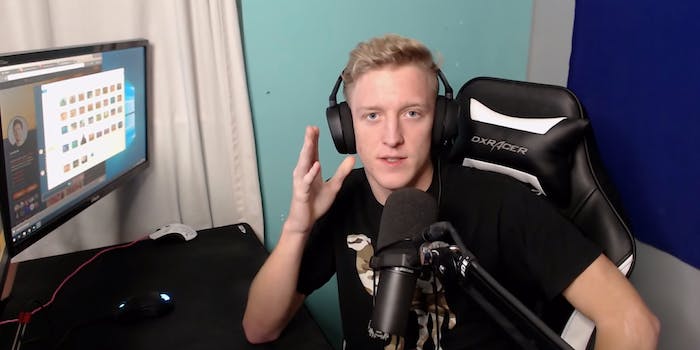 The lawsuit claims the contract is too restrictive.

Professional gamer Turner “Tfue” Tenney, 21, is one of the most successful Fortnite streamers on Twitch and a top athlete for the game’s esports scene. On Monday, Tenney sued his employer FaZe Clan for allegedly limiting his ability to fully pursue business opportunities through his profession.

The lawsuit alleges that FaZe neglected to pay Tfue his fair share of brand deal revenue and massively cut into his own earnings by taking up to 80% in some instances.

The court document detailing these complaints was filed by Tenney and his lawyers and was uploaded publicly by the Hollywood Reporter.

Tenney signed his original contract, referred to as a “Gamer Agreement,” with FaZe in April 2018. The document states that FaZe receives 80% of all revenue that Tenney makes through sponsored videos on Twitch and YouTube as a finder’s fee. Tenney’s channel currently has over 10 million YouTube subscribers and over 36,000 monthly Twitch subscribers.

In a statement later released via FaZe Clan’s official Twitter account, the organization refutes Tenney’s claims and the figures specified in the complaint. FaZe claims that the organization has only ever collected $60,000 from Tenney in total.

According to the complaint, Tenney first attempted to make the contract null and void in September 2018, but FaZe rejected Tenney’s request. Now, through this lawsuit, Tenney is attempting to get the court to terminate the agreement and is seeking punitive damages for earnings he says FaZe neglected to pay him.

Tenney and his lawyers claim that FaZe is operating as a talent agency without proper licensing and regulation, thus violating California law. The complaint also alleges that members of Faze Clan encouraged Tenney to drink and gamble while underage. “Not only does Faze Clan take advantage of these young artists, it jeopardizes their health, safety and welfare,” writes Bryan Freedman, one of Tenney’s lawyers, in the complaint.

The lawsuit and allegations carry major implications in esports’ path to full legitimization as a major industry. “Because the industry is so new, there is little to no oversight,” the complaint says.