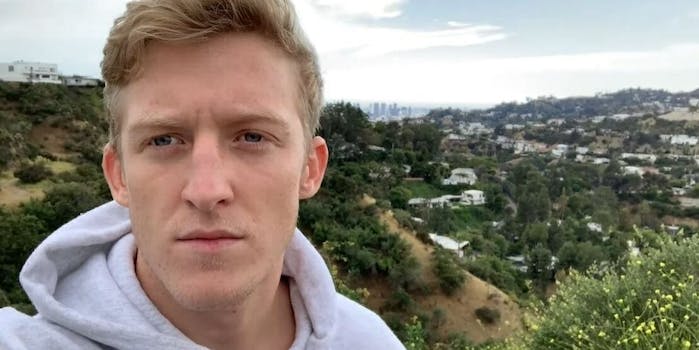 Tfue implores FaZe Clan to release the contract to the public.

One of esports’ biggest stars Turner “Tfue” Tenney is suing FaZe Clan for what he calls an unfair contract, and on Wednesday night, he released a video statement in which he implored the organization to release his contract to the public so “the people can see the truth.”

“I’m trying to serve justice to the esports industry,” Tfue said. “These kids are ripped off, and they’re getting taken advantage of. These contracts are not OK, and this needs to never happen again. I’m the first person to stand up and say this is fucked, this is not cool, this is fucking bullshit.”

Tfue called himself an “idiot” for signing the three-year contract when he didn’t know any better. He also said the contract calls for FaZe Clan to have the ability to “fucking take all my hard earnings and hard work” whenever the organization wants.

“What’s in this contact is so bizarre, it’s so fucked,” Tfue said. “I wish you guys could see it. I can’t even fathom it.”

In the lawsuit, Tfue—one of the world’s best Fortnite players who has more than 10 million YouTube subscribers and 36,000 monthly Twitch subscribers—said FaZe was contracted to take up to 80% of his earnings that he made on Twitch and YouTube sponsored videos.

Tfue’s lawyers also made the claim that FaZe members encouraged a then-underage Tfue to drink alcohol and gamble illegally. In his video statement on Wednesday, Tfue said his lawyers added that to the lawsuit without his permission and that he would get them to drop those allegations.

In its own statement, FaZe Clan said that, since the contract was signed in April 2018, it had collected $0 from Tfue in tournament winnings, Twitch revenue, and YouTube revenue. Instead, FaZe said it had taken a total of $60,000 from Tfue, who FaZe Clan said had earned “millions” as a member of the organization. FaZe Clan said it was “shocked and disappointed” to be served with a lawsuit.

FaZe Clan admitted that the original contract with Tfue said the organization could take 80% of a brand deal that it procured for a member, but it also said it had never collected on those earnings for any member of FaZe Clan. The organization said all contracts that had been prepared since last summer did not include that clause.

A follow-up from FaZe Clan on today's unfortunate situation. pic.twitter.com/qm6sK8v88B

On Wednesday night, Ricky Banks, another member of FaZe Clan, disputed Tfue’s claims. Banks said FaZe Clan offered Tfue $1 million per year with 0% splits so Tfue could simply represent the organization. “To act like we didn’t try to fix your situation multiple times is manipulative,” Banks wrote on Twitter.

Banks continued, “By the way we ARE indeed releasing the contract. Just got off the phone with the [higher-ups] and we’re preparing it for you guys now. I have nothing to hide and everything I’ve said throughout all of this is the truth. We tried for a straight year to come to a new agreement.”

Through his words, though, it’s clear Tfue, who said he had been trying to get out of the contract since last September, felt a lawsuit was his only path forward.

“I want to make it very clear that I tried multiple times for multiple months to get out of this contract,” he wrote on his YouTube video description. “This is what had to be done.”

Update 2:04pm CT: Banks admitted in another Twitter rant on Thursday that Tfue’s contract was “horrible,” but he still called him a “selfish asshole.”

Banks got upset on Thursday after Drama Alert’s Keemstar reported that Tfue wants to start his own esports organization.

Breaking : Tfue plans to make his own eSports Org

I have 2 sources telling me @TTfue wants to create his own Org. 1 source a Pro Fortnite Player. 2nd source Tfues Brother #DramaAlert pic.twitter.com/EYfWfaJF8W

It's disgusting and anyone who doesn't see straight past this, sorry but you're a fkn idiot. Turner isn't some martyr for the greater good, he's a selfish asshole who doesn't give a fuck about anyone but himself. Like seriously homie? You're down the street from me. Let's talk.

Banks also said that he would release the contracts FaZe Clan offered Tfue to make him happy—all of which he apparently declined to sign.

Listen you fuck @TTfue I really do still love you to death. If I could've prevented this from happening I would have. I did everything I could. I'm exhausted and I know you must be too. Let's sit down and talk, please. Bring whoever you want from your side, I'll come alone.

On Thursday, the Blast obtained Tfue’s contract from a source.

The @TTfue & @FaZeClan original contract was allegedly leaked to the @TheBlastNews ! Here are the key points & omg is the contract Horribly bad for TFue! pic.twitter.com/1CvBYS18xO