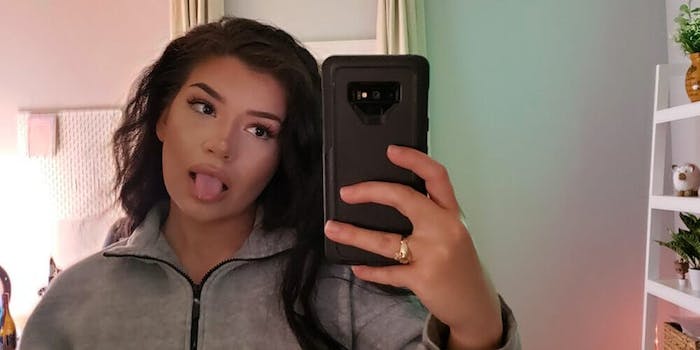 'I would like to know how many men I’ve gotten banned in the past year. It has to be like, a good 20 or so.'

A popular Twitch streamer is defending her comments after she says she was taken out of context while discussing “getting men banned” from the platform.

As reported by Dexerto, Kaylee, a gamer with more than 20,000 followers, appeared to boast during one of her streams about the number of men she was able to ban.

The comment quickly resulted in a backlash from some Twitch users who believed Kaylee was banning men without reason. But comments made during the same stream suggest the bans were made in response to harassment.

After explaining that she used an admin in her chat to have accounts banned, Kaylee noted that those being singled out had targeted her “for no reason.”

Kaylee commented on the incident on her Twitter account after her video made its way onto Livesteamfail, a subreddit dedicated to funny and controversial moments from live streams.

The gamer also asked her fellow female streamers if they too had received abusive comments on their channels amid the debacle.

“I genuinely have a question. Do other female streamer have random men coming into their steam saying obscene/ rude things constantly?” Kaylee asked. “I feel like I attract these men somehow because they’re everywhere.”

While streamers are allowed to ban anyone from their page’s chat, an outright ban from the entire platform can only happen following a review from Twitch.

The Daily Dot was unable to reach Kaylee for comment at the time of publication.