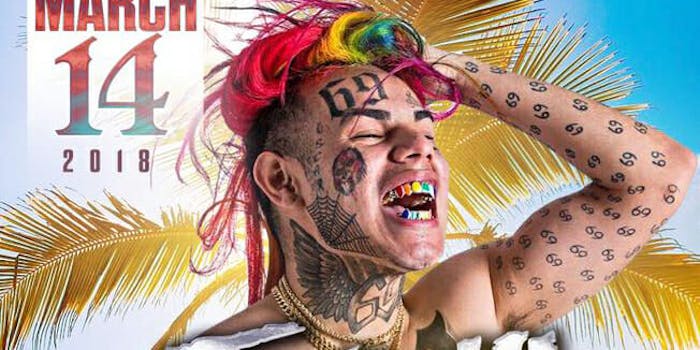 The rapper pleaded guilty to the use of a child in a sexual performance.

In a month, spring break will be in full swing across America’s beaches. Unfortunately for natives of South Padre Island, Texas, this year will bring more than just thousands of rowdy young people. A convicted felon who pleaded guilty to the use of a child in a sexual performance will be a headlining entertainer—and people aren’t happy about it.

One of the island’s venues, Clayton’s Beach Bar and Grill, announced last week that it booked rapper Tekashi 69 to perform on March 14. Tekashi earned two singles on the Billboard Hot 100 and was once widely considered one of 2017’s breakout stars in music. But Tekashi, whose real name is Daniel Hernandez, recently garnered national attention because he was convicted of a felony in 2015 for using a child in a sexual performance.

While Hernandez has publically denied the accusations, he pleaded guilty to partaking in three separate videos where a 13-year-old girl is inappropriately touched. He was 18 years old at the time.

Additionally, one of the rapper’s shows in Minnesota ended in gunshots after he got into a fight outside the venue.

Patrons are not happy about the show announcement. On the event announcement’s Facebook post, hundreds of people have commented that they are disgusted to hear that the venue would bring an artist to the island who’s known for taking advantage of young women.

Clayton’s social media manager did nothing but fan the flames of indignation. As the post filled with angry comments, the Facebook account continually auto-replied to every post, “See you at the show!” Some users said the account also marked their comments as spam if they pointed out Tekashi’s felony.

On Sunday, the venue issued a statement saying it was “surprised to hear” about the accusations.

“Clayton’s supports the arts however does not condone any artists’ misconduct on or off the stage,” the statement said. “Clayton’s venue plays host to all musical genres.”

Posted by Clayton's Beach Bar and Grill on Sunday, February 11, 2018

It did not, however, specify whether the event had been canceled.

On Monday, the Facebook page was promoting presale tickets that included a meet-and-greet with the rapper.

Clayton’s confirmed to the Daily Dot that the show has not been canceled.

“Let the people decide,” the venue said via Facebook Messenger. “If they want to buy a ticket, kind of like the cinema if you don’t like the movie don’t go to the show, or you can protest the theater if it suits you.”

Critics remain upset about the show and say the press release only proves that Clayton’s is OK with bringing in an artist who could potentially cause harm to its attendees.

Clayton’s IS condoning the artists behavior. They are STILL giving him a platform. Acknowledging the artist is problematic and NOT taking action, you are potentially endangering other people. They are part of the problem. To say Clayton’s is a trash business is an understatement pic.twitter.com/KK49IfbI43

Clayton’s booked a fucking creep at THEIR bar. Trash men saying “oh blame the promoter and artist not the venue”. bullshit. clayton’s is banking during spring break. they can afford to pass on a show. Tekashi 69 is disgusting and clayton’s should totally be ashamed.

Also, Clayton’s is super aware of what’s gone on so they can’t pull the “oh we didn’t know” card. People have been commenting how gross 69 is and whoever is running clayton’s FB page has been responding with troll-ass comments.

Whoever does the PR at Clayton’s is a compete jackass. First of all, why would u even book Tekashi in the first place? CLEARLY they are getting a huge backlash, but the responses make you look even worse. Even if ur getting traffic from it, u make the venue look HORRIBLE, wtf man pic.twitter.com/Ey6ubqnuhF

Supporters of the venue and rapper argued that the show should go on because it will be age-restricted and because parents shouldn’t be sending their underage children to South Padre Island for the week, anyway.

But spring break at South Padre Island—where other entertainment options include Steve Aoki and Cardi B—remains an attraction that brings an overwhelming amount of high school students to the island for live music. There are also many teens who live on the island and the adjacent Port Isabel.

Clayton’s and its supporters have yet to acknowledge the idea that venues shouldn’t support artists who mistreat women and underage children.