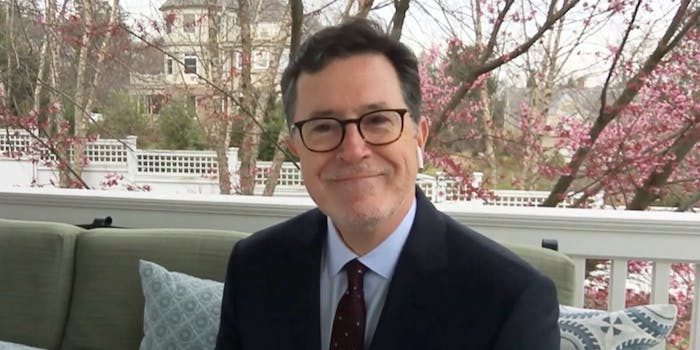 ‘The Late Show’ joins other late-night shows returning to TV

Production had been shut down due to the coronavirus.

For the past couple of weeks, late-night has gone weird and off-the-rails as several hosts took to YouTube to continue broadcasting. But starting next week, some of them are starting to make the return to television.

The Late Show with Stephen Colbert, which shut production down but has been producing monologues filmed from Colbert’s home, will start airing new episodes on TV on March 30. Both Colbert and his staff will be working remotely, something he assured viewers on Twitter.

According to CBS, guests for these new episodes “will be announced in the coming days.”

Conan already announced its plan to start airing new episodes starting March 30 with interviews being conducted by video chat. But in the past few days, The Late Show joins several hosts are also making the transition back to television.

The Daily Show, which rebranded as The Daily Social Distancing Show, started broadcasting on Comedy Central this past Monday as Trevor Noah films from home. The Tonight Show, which will return on Monday, will include a mix of “At Home” segments and older highlights. Full Frontal returned Wednesday as Samantha Bee filmed outside of her studio. Last Week Tonight is returning March 29 as John Oliver films from home, and Desus and Mero will have both Desus Nice and The Kid Mero filming from their homes.

Meanwhile, Jimmy Kimmel Live and Late Night both have yet to reveal when they’re returning to TV, while The Late Late Show is airing a primetime fundraising special on Monday (but doesn’t have a current return date).