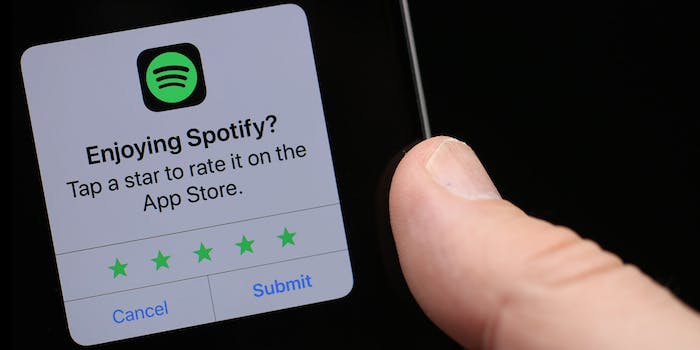 Spotify may just dethrone Pandora with its new ‘Stations’ app

Create your own personalized station by giving songs a thumbs up or thumbs down.

Known as Spotify Stations, the standalone app, first introduced in Australia last year, lets users select a genre of music and choose whether they like or dislike random songs to create a personalized station.

“Stations gets you to music instantly—no searching or typing needed,” a description of the app states. “As Stations learns more about what you like, it creates stations packed with the music you love, made just for you.”

The app offers both a free experience, which requires users to listen to occasional advertisements and a premium ad-free version that provides users with unlimited song skipping.

Users only need a Spotify account to start giving “thumbs up” or “thumbs down” to songs in the app. And although users are not required to have the main Spotify app, Stations also “incorporates Spotify’s popular personalized playlists Discover Weekly, Release Radar and Favorites,” according to Billboard.

The song-voting option has long been associated with Pandora, which ranks just behind Spotify in terms of popularity. Spotify brought in roughly 47.7 million monthly listeners in 2018 as compared to Pandora’s 36.8 million, according to consumer data firm Statista.

Spotify Stations affect on Pandora’s popularity remains to be seen, but the app has already received high-ratings in both the Apple and Google Play store. Despite the widespread rollout, Spotify has stated that it is still classifying its new app as a test.

“At Spotify, we routinely conduct a number of experiments to create better listening experiences for our users,” a Spotify spokesperson told Engadget. “Some of those tests end up paving the way for our broader user experience and others serve only as an important learning. Spotify Stations is one of those tests.”