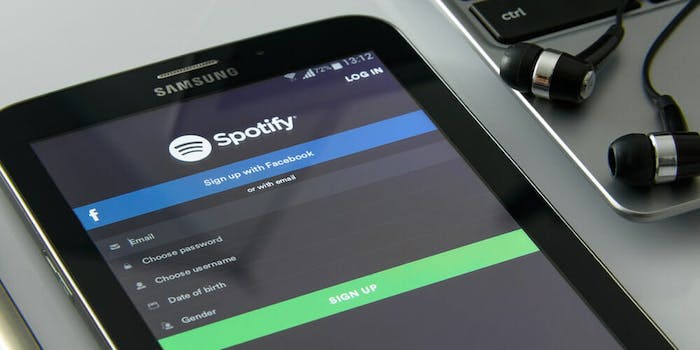 Reports: Spotify’s testing a new tool to let you DJ live with friends

The feature will enable users to add their favorite songs to their friends' playlists.

Spotify is reportedly testing a “Social Listening” feature that will enable multiple people to control the same playlist.

Spotify is working on Social Listening, letting friends to control music together with their own devices

Scan Spotify Code or open link for it to begin

The feature allows a user to present others with a special code or link that enables them to add songs to a shared playlist. A Spotify spokesperson did not confirm or deny to Tech Crunch whether the feature was officially in the works or seeing the light of day anytime soon.

An image of the new option shows that a user will be able to see which accounts are connected to their playlist.

When connected to Spotify's Social Listening, you will show up on the "Already connected" list

The "Now Playing" UI will show the amount of friends listening

(friend's identity here replaced with mine for privacy) pic.twitter.com/Fo5rdH3xGO

Anyone connected to a shared playlist will even be able to control which song is currently being played. It’s a shared queue, but apparently not music that is synced live to multiple users.

The feature will also be available on Spotify’s website, giving users from across the world the chance to share and play music with friends.

Spotify's Social Listening will also be available for web

This is how the invitation prompt looks like in the Web Player pic.twitter.com/bCEcD3GkOd

Given how polished the feature appears to be, many have speculated that the option could be launched in the near future. But Social Listening is only available for Spotify employees and persistent tech experts like Wong.

The 23-year-old hacker also famously discovered inside details on Facebook’s new dating feature prior to the company revealing the user interface publicly.