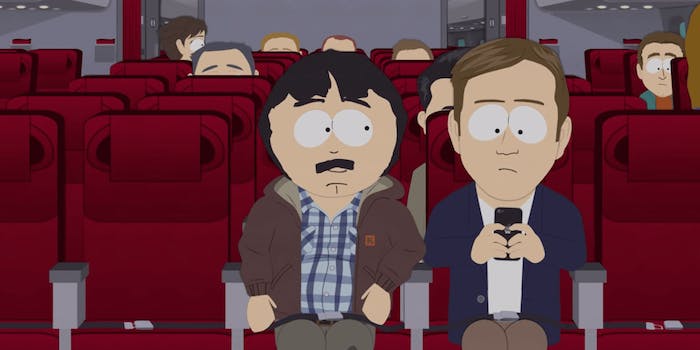 South Park commemorated its 300th episode last night by taking another shot at the Chinese government.

After last week’s episode featured plots critical of Chinese censorship and American corporations’ willingness to go along with it, the long-running Comedy Central cartoon doubled down on its critiques of Beijing in this week’s installment. “Fuck the Chinese government,” characters said three separate times during the episode.

This week’s episode, titled “Shots!!!”, is largely a takedown of anti-vaxxers, but the b-plot follows up on Randy Marsh’s dealings with the Chinese government, which began in last week’s “Band in China.” In this episode, Marsh has to choose between disavowing China and facing the enmity of his friends and family.

At first, Marsh holds out against the criticism, but he finally gives in to win back his partner, Towelie, an anthropomorphic towel.

“Band in China” was censored and scrubbed from the internet in China. Following the censorship, South Park creators Trey Parker and Matt Stone issued a statement that contained a tongue-in-cheek apology to the Chinese government. “We too love money more than we love freedom and democracy,” the duo wrote.

Chinese censorship made the news following Houston Rockets general manager Daryl Morey’s tweet in support of Hong Kong protestors. Morey and the NBA subsequently issued apologies for the tweets, and the NBA’s response earned the criticism of U.S. lawmakers on both the left and the right.

As South Park has pointed out over the past two weeks, American media companies, including Disney, often change their content to stay on the good side of China’s censors, even if it means glossing over human rights violations.