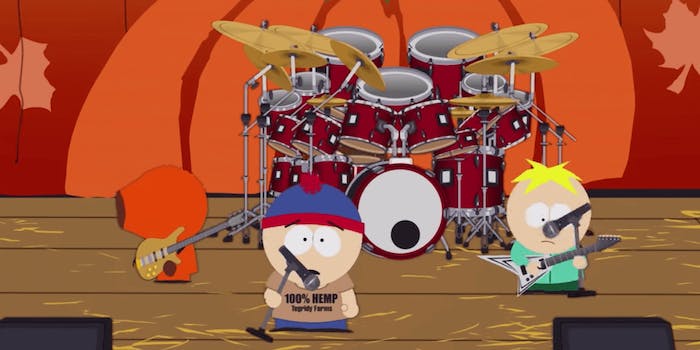 'We too love money more than freedom and democracy.'

South Park is no stranger to controversy, but in the past week, the show has taken on one of its biggest targets to date: China.

In the episode, Randy Marsh, one of the series’ most prominent characters, takes a trip to China in hopes of growing his marijuana business. He is forced into a work camp where he meets Winnie the Pooh, a character banned in China after people pointed out a resemblance to Chinese president Xi Jinping. Concurrently, the South Park children form a band with the express purpose of appeasing Chinese censors.

The episode, titled “Band in China,” was quickly erased from various media platforms in the country, including Baidu Tieba, Youku, and Weibo.

South Park’s brush with censorship coincides with an international incident in the world of sports. Houston Rockets general manager Daryl Morey tweeted positively about protests in Hong Kong last Friday. China deeply opposes the protests, and NBA brass rushed to distance themselves from his comments.

Morey issued an apology on Sunday. “I did not intend my tweet to cause any offense to Rockets fans and friends of mine in China,” he wrote at the beginning of a thread. “I was merely voicing one thought, based on one interpretation, of one complicated event. I have had a lot of opportunity since that tweet to hear and consider other perspectives.”

2/ I have always appreciated the significant support our Chinese fans and sponsors have provided and I would hope that those who are upset will know that offending or misunderstanding them was not my intention. My tweets are my own and in no way represent the Rockets or the NBA.

A number of American companies have been careful to avoid the ire of Chinese censors. Notably, Disney is known to finesse its scripts to avoid any issues with the Chinese government. South Park calls this out in the episode, depicting Mickey Mouse and characters from Marvel and Star Wars films.

Several American companies have also been quick to release statements when they fall on the wrong side of China’s censors. On Monday, South Park creators Trey Parker and Matt Stone mocked such backtracking by issuing a fake apology of their own.

“Like the N.B.A., we welcome the Chinese censors into our homes and into our hearts,” Parker and Stone wrote on Twitter. “We too love money more than freedom and democracy. Xi doesn’t look just like Winnie the Pooh at all.”