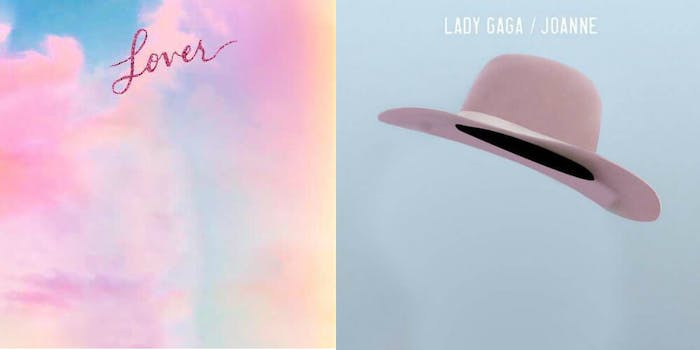 Female artists are being removed from their own album covers

Lana Del Rey, Billie Eilish, and Taylor Swift are some of the artists affected by the censorship.

Pop icons are being removed from their own single and album covers in Iran, simply because they are women. Now their stans are reacting to the censored albums on social media.

The Twitter account Pop Crave, which dishes out all the latest pop culture news for the Twitter-verse, pointed out the censorship in a now-viral tweet. The post features some of the most recognizable albums, so recognizable, in fact, that it’s easy to distinguish which albums they are even with a major missing component: the female artists who usually inhabit the fronts of them.

The censored covers now feature a floating pink cowgirl hat on the cover of Joanne, an empty bed where Billie Eilish usually resides on the cover of When We All Fall Asleep, Where Do We Go?, and a single white man on the cover of Lana Del Rey‘s Norman Fucking Rockwell! (Fun fact: It’s actually Duke Nicholson, as in the grandson of  Jack Nicholson.)

At least one Iranian music streaming service, Melovaz, is removing the female artists from their covers, the Daily Dot can confirm.

Some fans are reacting in a rather unexpected way: with humor. One dubbed it “funniest thing I saw today,” and others couldn’t get over Lady Gaga’s floating cowgirl hat.

female artists on their album covers in iran pic.twitter.com/nFlzSjKRJi

THE JOANNE COVER IS SENDING ME OMG I LITERALLY CANT BREATHE

Even Iggy Azalea, who is one of the artists affected by the censorship, tweeted about it. “The jokes on them cause I put a vagina reference in every song so who really won,” Azalea wrote.

The jokes on them cause I put a vagina reference in every song so who really won. https://t.co/LqLiuGpS8F

But all jokes aside, women’s rights are greatly restricted in Iran, and it is illegal for women to be seen uncovered publicly–hence the censored album covers. Women aren’t even allowed to attend sporting events. In September, Sahar Khodayari, also known as “blue girl,” snuck into a stadium to watch her favorite football club play. After being caught, she was sentenced to six months in prison, and in protest, she set herself on fire. Khodayari succumbed to her injuries a week later on Sept. 9.

The Daily Dot has reached out to Melovaz.