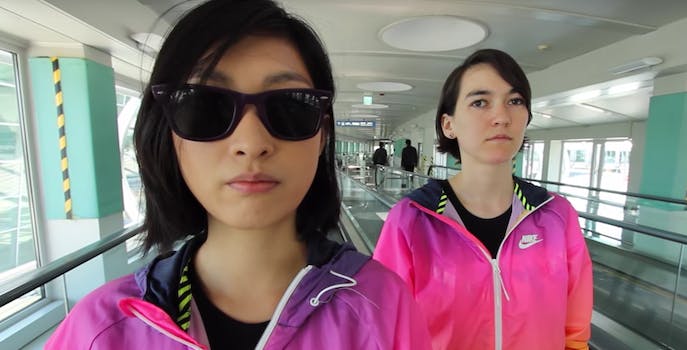 'Adventure is more than a plane ticket.'

After uploading their first video to Do Stuff, filmmakers Soo Zee Kim and Leigh Cooper weren’t sure if there would ever be a second. But as the views on their Budapest adventure began to roll in, the pair started to see their channel’s potential—a project about the multilayered idea of “adventure.”

Both based in South Korea, Soo Zee and Leigh first made their name on YouTube when they joined the Eat Your Kimchi crew in 2013. At the time, they were the first interns, and later employees, to appear on camera alongside hosts Simon and Martina. Over the next two years, they gained their own following. When Simon and Martina announced their move to Japan in 2015, they asked fans to respect Leigh and Soo Zee’s privacy as the pair began embarking on their new careers. At the time, fans only dared to hope that the talented duo would continue making videos on YouTube.

“We want people to be caught up by the feeling and go out and do stuff when they see our videos,” Soo Zee and Leigh told the Daily Dot via email.  “Not necessarily only travel which is just one type of adventure, but we want people to try new things in their life—whether it’s trying out a new dessert or trying to be morning person. Adventure is more than a plane ticket. It’s doing something you’re not entirely sure of what the outcome will be.”

Do Stuff is a creative playground where Soo Zee and Leigh’s imaginations run wild. While their videos differ in subject from travel videos, explorations of movie theaters in South Korea, cooking tutorials, and more, each clip maintains their signature style. Last year, their video “Korean Movie Theaters Are Awesome,” began trending internationally and first put them on the map as rising talent on YouTube.

Their filmmaking style is immersive, their humor is dry and understated, and the use of a narrator rather than their own voices lends a storybook feel in each video. It’s reminiscent of Wes Anderson’s filmmaking, and Ze Frank’s humor and narration.

“Our style is so different from what you normally see on YouTube, we didn’t expect other people to like watching the kind of videos we like making,” they said. “One of our viewers told us they never knew what to expect from Do Stuff, but that they knew it would be good. That’s exactly what we’re going for.”

The most important aspect of this channel is the example Soo Zee and Leigh have set for female viewers and future filmmakers.

Through this #WCW series, I’ve had the privilege of talking about filmmaking pioneers like Anna Akana, Yulin Kuang, Sara Dietschy, Hazel Hayes, and more. But Do Stuff is a collaboration between two talented, authentic women—even in 2017, that’s rare on YouTube. It’s individuals like Soo Zee and Leigh who continue to give women hope that there is a space for their voice to be heard and appreciated.

“Ideas are great, but it’s the execution that matters. Even if it’s messy, even if it’s not perfect, the thing you actually make counts for a heck of a lot more than the thing you thought about making,” Soo Zee and Leigh advise fellow filmmakers. “So someone else already does it? Do it better. So you did it once? Do it again. We learned to press the publish button even when we’re not 100% confident, or not 100% happy with final video. In the end, the fact that we press it anyway has kept us moving forward. That’s probably the biggest lesson: keep doing it. When it feels like a pipe dream, when you hate everything you’ve ever made, when you’d rather sleep in just this once, keep making stuff.”

Soo Zee and Leigh have already expanded their imprint to include Extra Stuff (an email newsletter with special videos for fans), and Taste Stuff (an Instagram showcasing food culture in South Korea). This year, they will be releasing their first podcast, Film Stuff, a series in which they will nerd out about all things film and storytelling. Though their videos clearly value artistic vision over “going viral,” there is no doubt this pair will continue to rise in popularity. It’s about time you strap in and enjoy the ride.