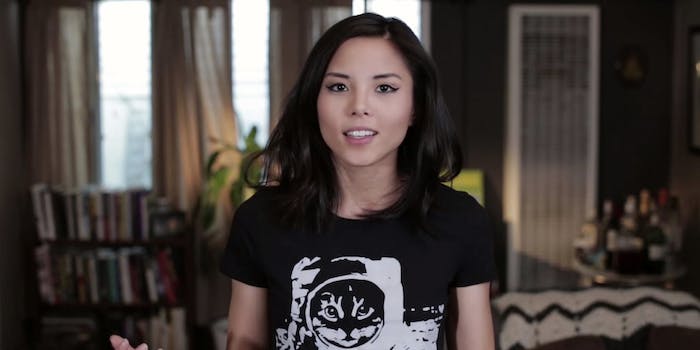 #WCW Anna Akana takes filmmaking into her own hands

We volunteer to cat-sit when she takes a much-deserved vacation.

The Daily Dot is celebrating Woman Crush Wednesday, better known as #WCW on Twitter and Instagram, by highlighting female creators onYouTube whose work we admire.

I’ve rewritten this intro nine times in the hope that with each rewrite, I’ll sound a little less like an over-the-top fangirl (who also happens to be a cat lady) and more like an admirer who plays it cool when her lady crush walks into the room. But alas, it appears my love for filmmaker Anna Akana runs too deep and thus, let the gushing valentine begin.

With her motorcycle license, Hollywood credentials, freshly minted clothing line, obsession with cats (she has four), catalogue of short films, and passion for pole dancing, Anna Akana is one badass babe whose YouTube vlogs have captured over 108 million views.

She originally started her channel in 2011 as an antidote to the anxious waiting between casting calls as she pursued acting in Los Angeles. YouTube allowed her complete control over her own content, and in the past four years, she’s created countless videos that are empowering, hilarious, and educational for young females looking to break into the entertainment industry.

While a large portion of her videos capture stories about her daily life, Anna also makes a point of sparking conversations around topics that really matter, such as race, victim blaming, sexual harassment, suicide prevention, and positive body image. After a few years of solely creating weekly videos, Akana decided to up the ante and begin directing, producing, writing, and starring in a series of short films on her channel. In the past year, she’s created the five-part series Riley Rewind—a feature about a time-traveling girl determined to stop the suicide of a classmate—along with incredibly involved shorts such as “Miss Earth” and “Afflicted, Inc.”

On top of all this, Anna also hosts her own live comedy show with her boyfriend, Brad Gage; recently launched her own clothing line, Ghosts and Stars; and is acting alongside Sally Fields in the upcoming indie film Hello My Name is Doris.

Yes, her accomplishments are vast and well-deserved, but for me, the thing I find most inspiring about Anna is her authenticity and courage to be herself even in front of 1.2 million subscribers. Her laser focus on her goals and drive to push herself as a creative talent and human being is something I find so inspiring for my own work. A creator who isn’t afraid to speak her mind and who empowers young women through example? Now to me, that’s something definitely worth celebrating.