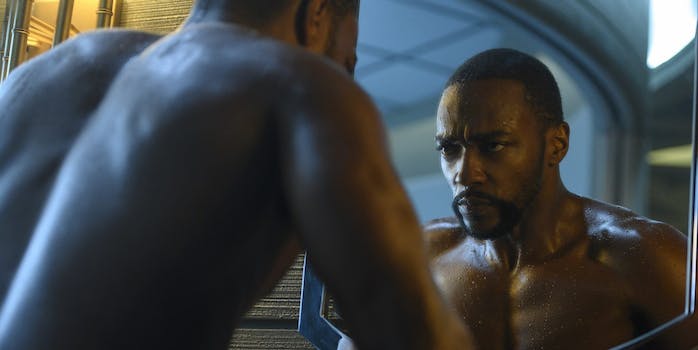 Two years after watching season 1, it was a little confusing to return to Altered Carbon’s tangled web of body-swapped characters and glitching cybernetic memories. Our cyberpunk hero, Takeshi Kovacs, has switched bodies (“sleeves”) once again, replacing Joel Kinnaman with Marvel star Anthony Mackie, although there’s a brief interlude where Kovacs is played by a woman.

This body-swapping conceit is mostly used to illustrate economic inequality, only occasionally digging into the more nuanced ramifications of people living in bodies that aren’t their own, especially when it comes to race and gender. (Richard K. Morgan, author of the original Altered Carbon novels, has expressed transphobic views on social media, but this doesn’t shine through in the TV show helmed by Laeta Kalogridis.) The show’s initial premise involved a biracial Japanese/Hungarian protagonist portrayed by a white man, echoing a long tradition of Western cyberpunk media co-opting Japanese names, imagery and pop-culture while focusing on white/American heroes. It didn’t help that Joel Kinnaman was less compelling than the original Takeshi Kovacs we saw in flashbacks (Will Yun Lee), who introduced the character during a more vulnerable period of his life, embarking on a doomed love affair with the revolutionary leader Quellcrist Falconer (Renée Elise Goldsberry). So, how does season 2 fare with a new Kovacs in the lead?

RELEASE DATE: Feb. 27, 2020
CREATOR: Laeta Kalogridis
STREAMING: Netflix
Set in a cyberpunk future where people can download their memories into new bodies, Anthony Mackie stars as former soldier Takeshi Kovacs, embroiled in a murder investigation on the colony planet Harlan’s World. Despite an appealing cast and well-choreographed combat scenes, ‘Altered Carbon’ is let down by its dour, overcomplicated story.

Thirty years on from the events of season 1, Kovacs is forcibly resleeved into an Anthony Mackie-shaped supersoldier body. Spliced with canine DNA, Kovacs is now superhumanly strong, with a high-tech connection to a pair of personalized handguns. His new adventure begins on Harlan’s World, a colony planet founded by a man called Harlan, whose daughter Danica (Lela Loren) rules over a generic cyberpunk metropolis. Altered Carbon clearly spends a lot of time and money on its elaborate production design and costumes (more excellent work from Ann Foley), but it’s largely filmed in the dark, an ongoing plague among grim-and-gritty TV dramas. 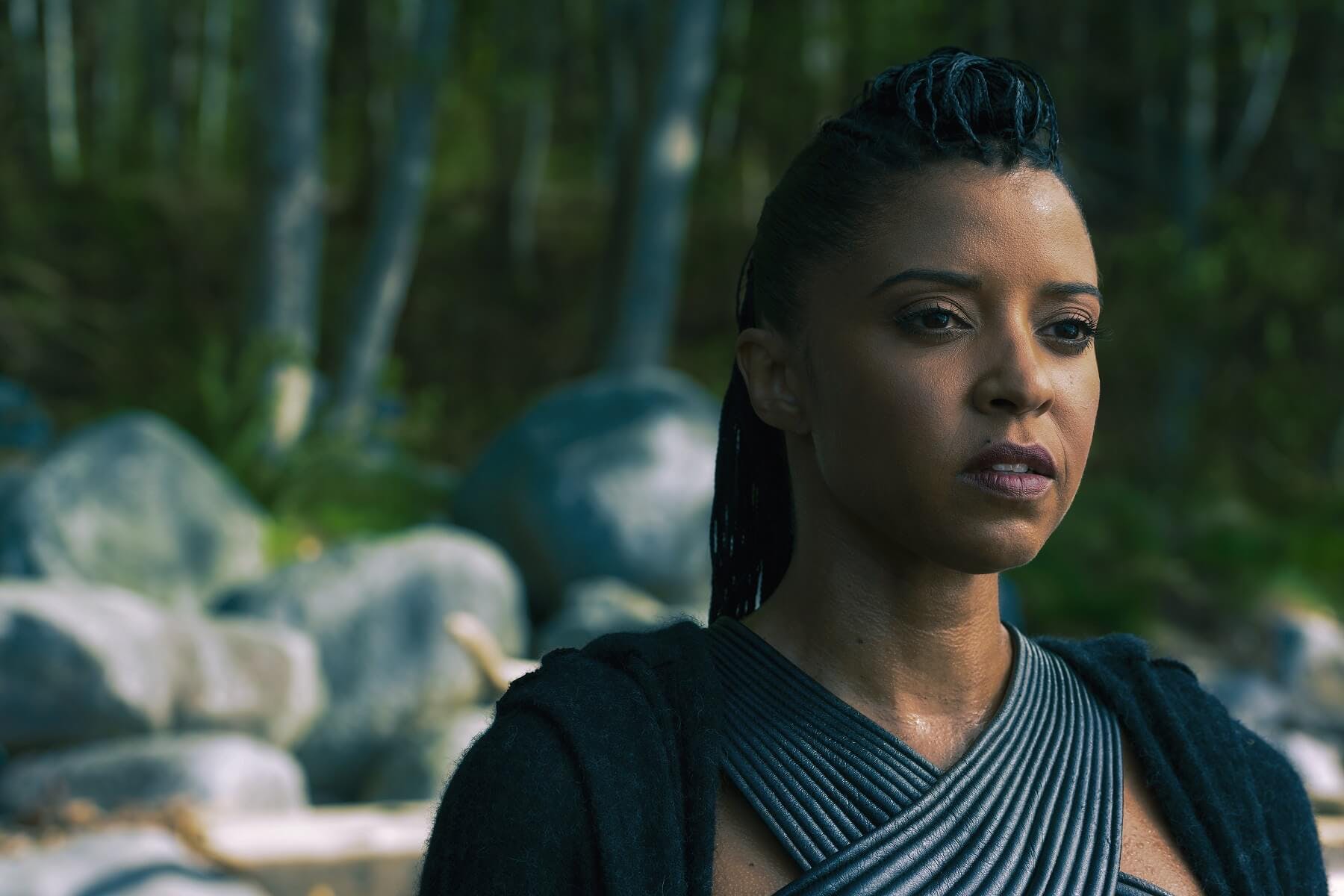 Once again we’re embroiled in an overcomplicated clash of aristocratic conspiracies, noir crime subplots, and callbacks to Kovacs’ tragic backstory as a soldier-turned-revolutionary. Wealthy people like Danica Harlan can afford to have their memories resleeved into an endless string of youthful bodies, making them functionally immortal while others live in poverty. Down in the planet’s criminal underworld, season 2 introduces Luke Cage actress Simone Missick as Trepp, a tough gay bounty hunter who crosses paths with Kovacs. She has her own thing going on, unlike Kovacs’ recurring sidekick (Chris Conner), an Edgar Allen Poe hologram who is obsessively loyal because… this type of gruff antihero always needs a perky sidekick, I guess? (Hello, The Witcher.) Poe actually gets a perky sidekick of his own this season, an AI called Dig 301 (Dina Shihabi) whose motives for sticking around are equally thin.

Kovacs gets sucked into a hunt for a mysterious killer on Harlan’s World—a killer who may be connected to his old lover Quellcrist Falconer. Like any noir protagonist worth his salt, Kovacs is tormented by memories of women from his past, which in this case includes Quellcrist, his old detective partner Kristen Ortega, and his sister Reileen. Fortunately, the Quellcrist/Kovacs romance was my favorite subplot last season, but Kovacs’ recasting introduces a new problem.

In Doctor Who, each iteration of the Doctor has a slightly different personality, but they’re all clearly the same person because they share key traits. Kovacs’ transitions should be smoother because he’s exactly the same person each time, but his personality just isn’t distinctive enough to maintain a sense of emotional continuity. Will Yun Lee was more engaging during season 1’s flashbacks, but by the time he’s played by Joel Kinnaman (300 years later in the story’s chronology), he just seems like a stereotypical action hero: stoic, humorless, and good at fighting. Season 2’s upgrade is similar, except with Anthony Mackie’s voice and body language. Takeshi Kovacs just doesn’t have enough unifying mannerisms or unusual character traits to tie these performances together. To me, the most interesting moment was when he was played by a woman, because Kovacs’ gruff, macho persona suddenly becomes more noticeable. At the same time, we discover that Kovacs can comfortably immerse himself in feminine gender presentation, ranging from skillful makeup choices to a job that differs massively from his usual behavior. In the four episodes I watched for this review, they don’t clarify whether he chose this body himself (which would add an interesting new dimension to the character) or if he was forced to use it due to extenuating circumstances.

Season 2 benefits from more screentime for the original Kovacs and Quellcrist Falconer, expanding the sci-fi worldbuilding beyond its urban cyberpunk beginnings. The action scenes are great, and I was glad to see the show abandon its earlier obsession with sexualized violence against women, but unless you were already invested, Altered Carbon hasn’t become must-watch TV in the way The Expanse transformed itself from season to season. Despite boasting an impressive cast, the show routinely gets bogged down in laborious exposition scenes and unnatural, jargon-filled dialogue. Above all, it’s just not very entertaining. Screentime is mostly split between fight scenes, plot-heavy exposition, and people being stressed or traumatized, with barely any humor or quiet moments shared among the main characters. This kind of relentless misery is fine for something like Chernobyl or The Terror, but Altered Carbon is neither aiming for that level of hard-hitting drama or achieving it.

Season 2 of Altered Carbon arrives on Netflix on Feb. 27.