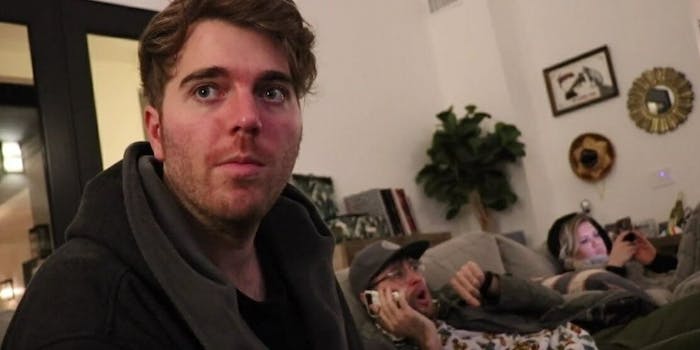 'It’s the risk of being into this dark sh*t, I guess.'

Though it’s accumulated nearly 7.5 million views and more than 200,000 comments less than 24 hours after its release, Dawson’s work was originally demonetized by the site, meaning he wouldn’t have earned any of the potential ad revenue produced by the video.

About 12 hours after the video’s release, the video was remonetized by YouTube, and as of this writing, ads are currently running on it.

Originally, the documentary wasn’t demonetized because of the conspiracy theory subject matter, despite speculation. Instead, YouTube mistakenly believed some parts of his video violated the advertiser-friendly content guidelines when he discussed dangerous acts in his video.

In those guidelines, YouTube writes that “video content that promotes harmful or dangerous acts that result in serious physical, emotional, or psychological injury is not suitable for advertising. Some examples include videos depicting painful or invasive surgical or cosmetic procedures, or pranks involving sexual harassment or humiliation.”

On Thursday morning, YouTube reviewed the video and determined Dawson was not promoting dangerous or harmful acts. He was only discussing them. That’s when it gave him back the ability to make ad revenue. Still, despite its massive audience, the video doesn’t appear on YouTube’s trending page (curiously, his trailer for the documentary, titled “Conspiracy Series” that was uploaded earlier this month, is still trending).

Some fans originally believed the conspiracy theory subject matter was the reason for his demonization, and it makes sense.

After years of problems with conspiracy theory videos littering the site—including YouTube Kids—and those creators manipulating the platform so more people would be exposed to them, YouTube announced earlier this month that it would adjust its algorithms so those types of videos wouldn’t be featured in the recommended section quite as much.

“We’ll begin reducing recommendations of borderline content and content that could misinform users in harmful ways—like videos promoting a phony miracle cure for a serious illness, claiming the earth is flat, or making blatantly false claims about historic events like 9/11,” YouTube wrote.

Dawson—who was named the Daily Dot YouTuber of the Year in 2018 for his popular documentary series on Jake Paul, Jeffree Star, and Tana Mongeau—had been teasing the idea for months that his next project would be exploring the world of conspiracy theories. Three months after uploading the finale of his series exploring the mind of Jake Paul, his more than 20.1 million YouTube subscribers were ready for his new 104-minute production.

Though ad revenue has been returned to Dawson—who had the ability to appeal YouTube’s original decision to demonetize but apparently didn’t—some of his fans were massively unhappy at first. Wrote one person, “@YouTube you really demonetized shane’s new video! fuck you! he put so much effort into this 1 [hour] and 44 minute video and you go a take away is money source! you’re pathetic! he’s the only one on your platform creating good content that everyone loves!”

But it sounds like YouTube’s original decision wouldn’t have been a complete surprise to Dawson either.

“I’ve never made money on my conspiracy videos and I’ve had some removed,” Dawson wrote on Twitter. “It’s the risk of being into this dark shit, I guess!”

ohhh ya. i’ve never made money on my conspiracy videos and i’ve had some removed. it’s the risk of being into this dark shit i guess! love ur stuff btw!! 🙏🏻

Update 11:22am CT: A YouTube spokesperson told the Daily Dot on Thursday morning it had made a mistake with the initial demonetization of Dawson’s video.

“To show ads, videos must comply with our Advertiser-Friendly Guidelines,” YouTube said. “Sometimes we get it wrong when determining whether a video is suitable for advertising, so we encourage creators to appeal for a review if they think there’s been an error. We work quickly to restore advertising as soon as we’re made aware of a mistake.”