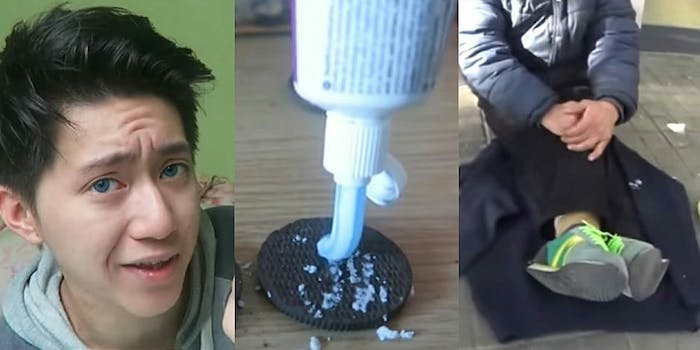 He’s also been banned from uploading to YouTube for five years.

A YouTuber from Spain who uploaded a prank video in which he fed toothpaste-filled Oreos to a homeless man has been sentenced to 15 months in prison and has been banned from making YouTube videos for five years.

But the YouTuber known as ReSet, whose real name is Kanghua Ren and who has 1.2 million subscribers, uploaded a video on Sunday in which he implored his followers not to believe everything the media said.

It’s unclear if that video, which is monetized and which has already garnered more than 75,000 views, violates the Barcelona court’s order not to create any more vlogs.

The incident occurred in 2017 when ReSet, who was then 20 years old, filmed himself scraping out the filling from cookies and replacing it with toothpaste. He showed himself approaching a homeless man, giving him the cookies and a‎‎‎ €20 bill. After eating the cookies, the man reportedly vomited and feared for his life.

On the video, which has since been deleted—which earned ReSet €2,000 according to court documents—he said, “Maybe I’ve gone a bit far, but look at the positive side: This will help him clean his teeth. I think he hasn’t cleaned them since he became poor.”

According to the New York Times, ReSet isn’t likely to spend any time in prison, because “Spanish law normally allows sentences under two years for first-time offenders in nonviolent crimes to be suspended.”

None of that stopped ReSet from taking his case to YouTube on Sunday on a different YouTube channel that has more than 260,000 subscribers.

In the video description of the video, he wrote that newspapers make up words to make people look bad (even though he said the stories weren’t completely false).

According to Spanish media reports, ReSet’s defense in court was that the video was simply a joke for his fans. “I do things to mount a show: People like what is morbid,” he reportedly told the court. The judge, though, said ReSet had shown “cruel behaviors” against “easy or vulnerable victims.”