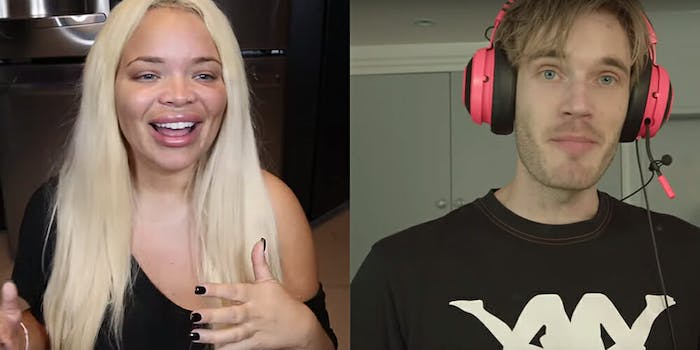 Paytas said he made her feel like an 'awful person.'

A few weeks after getting into YouTube feuds with two prominent content creators over her Instagram photos and ghosting a potential collaborator, Trisha Paytas has caught the attention of the biggest independent YouTuber of all—and PewDiePie had plenty to say about Paytas’ online rivalries.

The online hate began for Paytas earlier this month when Ethan Klein of h3h3Productions made a vlog about her manipulating her Instagram photos and saying, awfully, that she went from “beauty queen to WWF wrestler in two seconds.” He laughed at her and body-shamed her in a revolting way. She responded by tweeting, “You are a disgusting piece of shit. Your recent video is not only predatory—it’s also HARMFUL to young girls … I was suicidal at age 13, 15, 19, 22, and 25 over comments like yours. You went beyond opinions, you are going for extreme bullying that could lead to many girls wanting to take their lives like I did for so many years.”

Then, a food YouTuber named Nikocado Avocado who has 1.4 million subscribers, made a video blasting Paytas for a collaboration that fell through. He says she went silent on him after he repeatedly tried to message her to set up plans.

In her response video to Nikocado Avocado, Paytas said getting ghosted by a fellow YouTuber “kind of sucks,” but she said she began feeling uncomfortable with his repeated attempts to contact her.

As a result, Paytas’ channel (4.8 million subscribers) has been losing subscribers for 22 days. Meanwhile, PewDiePie weighed in with a video titled “Trisha Paytas without makeup,” calling her a “liar” and a “manipulator” and saying she plays the victim.

“Now that we know she’s not a good person, it’s OK to make fun of her,” said PewDiePie, whose channel is approaching the 100 million-subscriber mark.

PewDiePie also took offense that Paytas had suggested to Klein’s pregnant wife that she divorce him ASAP.

“I think that’s pretty fair,” PewDiePie said sarcastically. “Tweeting someone’s pregnant wife how to raise their child and to leave their husband. Jesus Christ, could she have been any more gross about it?”

In her response video to PewDiePie late Thursday, Paytas said he made her feel like an “awful person,” mostly because he called her a liar and a manipulator. But she said she was keeping herself positive.

“We’re talking about building ourselves up. We need to give ourselves props,” she said. “I am freaking strong. I get up and keep doing it.”