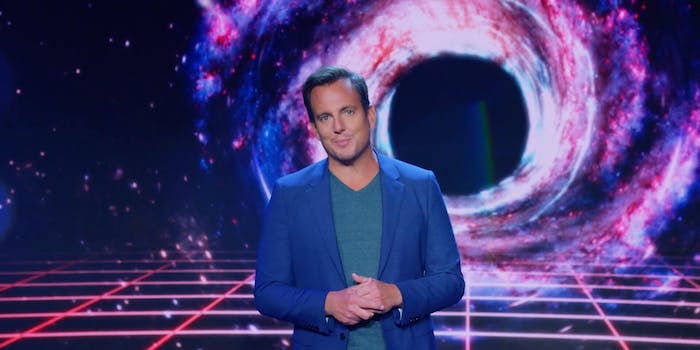 The Quibi show looks suspiciously similar to a 2014 YouTube channel with the same name.

Mobile streaming service Quibi is off to a rocky start, with dubious reviews for its first round of shows on launch day, and now some mutterings of plagiarism. Memory Hole, a Quibi show hosted by comedy actor Will Arnett, has been accused of copying its title and logo from a 2014 YouTube channel.

Quibi’s Memory Hole shares bizarre vintage VHS clips and pop-culture ephemera, with Arnett as a wry, mocking commentator. The first couple of episodes focus on terrible sports team rap songs from the 1980s, delivered with a mock-retro aesthetic. Meanwhile, the old Memory Hole YouTube channel was a collection of bizarre vintage VHS clips, curated by the creators of the cult video remix site Everything Is Terrible!. The concepts are pretty similar, and the Memory Hole logos are nearly identical.

The Everything is Terrible! account described Quibi’s show as a ripoff, posting a screencap of a comment where the show’s creator, Scott Vrooman, apparently acknowledges that he knew about the old Memory Hole YouTube channel.

Shout! Factory, the company behind Quibi’s Memory Hole and the new MST3K series, replied on Twitter, saying: ““Memory Hole” is an original show. The name of the show was inspired by George Orwell’s “1984,” and the graphics are based on generic retro ’80s arcade games. Anything that suggests otherwise is not true. We stand by our work.”

Read more: The best and worst of Quibi’s unscripted shows

On the one hand, yes, the term “memory hole” is from 1984, and the arcade game graphics are an obvious choice for a show about ’80s pop culture ephemera. On the other hand, there’s no way the creators of Quibi’s Memory Hole were unaware of the Everything is Terrible! channel because both projects draw from similar source material, and EIT! built a well-known internet brand around collecting and remixing weird VHS content. The main difference is that Quibi’s version has a celebrity host delivering slightly stilted comedy quips, while the YouTube version is considerably weirder and more disturbing. So while the source material of vintage VHS tapes is fair game for both sets of creators, it’s hard not to see the overlap between Memory Hole and Memory Hole.