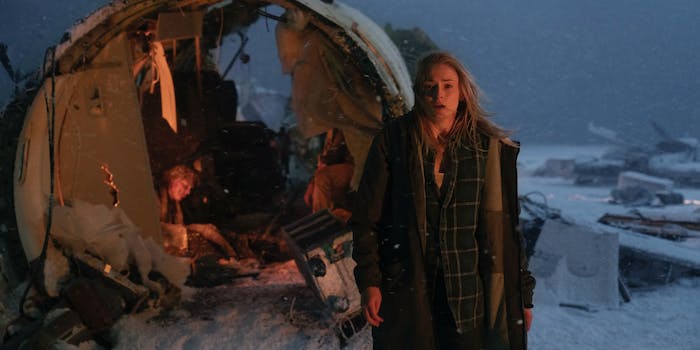 Quibi’s ‘Survive’ is riddled with clichés and pacing issues

Sophie Turner brings in a strong performance in this otherwise spotty thriller.

Based on the critically acclaimed novel by Alex Morel, Survive follows Jane (Sophie Turner), a young woman who’s thrust into a life-or-death situation after she and Paul (Corey Hawkins) survive a plane crash. It’s a thriller that’s also largely an internal story from Jane’s perspective; we spend much of the first few chapters (the term Quibi uses for its episodes) in her head.

RELEASE DATE: April 6, 2020
DIRECTOR: Mark Pellington
STREAMING: Quibi
Two strangers are forced to rely on one another in the bitter cold after they’re the only survivors of a plane crash that leaves them in the middle of nowhere.

But as much as Survive escapes becoming completely melodramatic thanks to nuanced performances, there’s a disconnect between the characters and the story at hand, often leaning more on its visuals—and Quibi’s distribution method hinders its connection.

We’re introduced to Jane as she prepares to go home after a nearly year-long stay at Life House, a home focused on helping young people work through and recover from trauma, after she attempted to kill herself. Jane—who has PTSD and suicide ideation, according to a graphic indicating why each person we meet is at Life House—is haunted by her past, her dreams of a plane crash, and the “legacy” of having multiple people in her family, including her father, die by suicide. She’s an unreliable narrator, telling us both that she’s a terrible liar (but that might be something she’s lying about), and in quieter moments, she remembers her last attempt and imagines how easy it could be for her to kill herself, whether it’s in the shower or on the flight home.

Those moments, which appear intermittently in Survive’s first five chapters but are especially prevalent upfront, aren’t as explicitly graphic as the controversial and now-deleted scene from the first season of 13 Reasons Why. But the striking visuals, the flashes, and the slow-motion incorporated into certain shots still manage to feel irresponsible and out of place, the kind of scene that might work better on the page than on-screen. (Several of the chapters made available to critics included trigger warnings at the beginning and a message at the end of the episode indicated several resources for audiences to use.)

Turner helps breathe humanity into Jane with the kinds of nuances we know that she could pull off from her tenure as Sansa Stark on Game of Thrones, but she can only do so much with a cliché-filled script. Hawkins’ character instantly charms when he arrives on-screen. He’s able to bring a sense of levity to any situation with soothing words and a smile, and in another story, Jane and Paul’s meeting would be the kind of meet-cute to set up a romance. Instead, it’s a fleeting connection that turns critical once the plane crashes, leaving Jane and Paul the only known survivors left to fend for themselves against the elements.

While Survive is described as a “thrilling drama” by Quibi, its pacing doesn’t seem to suggest as much. It feels more like a feature-length screenplay chopped up into eight-to-10-minute segments with little regard for tension, suspense, or flow—turning what could be a thrilling story into something much more lackluster.