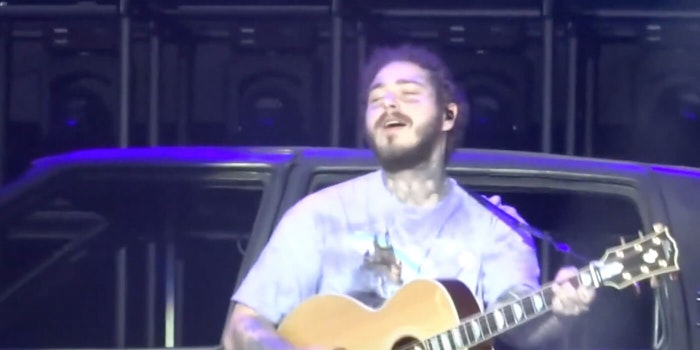 The cover follows the Foo Fighters' plea for Oasis to stop bickering and get back together.

At the famed Leeds Festival last night, headliner Post Malone came out during Twenty One Pilots‘ set to assist them in covering Oasis’ 1995 anthem “Don’t Look Back In Anger.”

The performance comes after the Foo Fighters made a plea for Liam and Noel Gallagher to stop bickering and to get back together at Reading, Leeds’ sister festival. The Gallagher brothers’ degenerating relationship in Oasis ended with Noel stating his departure in August 2009, following yet another backstage altercation with Liam. The rest of the group, led by Liam, continued as Beady Eye until they broke up 2014. The Gallagher brothers have intermittently squashed their beef, though the goodwill rarely lasts long.

WATCH: @twentyonepilots were just joined onstage at #leedsfestival by @PostMalone for a cover of Oasis’ ‘Don’t Look Back In Anger’ pic.twitter.com/3QuZdTb1bH

Twenty One Pilots had already covered the song on Saturday during their Reading set. Malone, perpetually enthusiastic about pandering to fans with easy pop, linked up with lead singer Tyler Joseph for an unusually sensitive rendition. Getting people to sing along to Oasis tracks, almost anywhere in the world, is an effortless play. Posty, however, manages to make it feel somewhat authentic.

There’s been no word on Liam and Noel Gallagher’s inevitable and impending reaction.