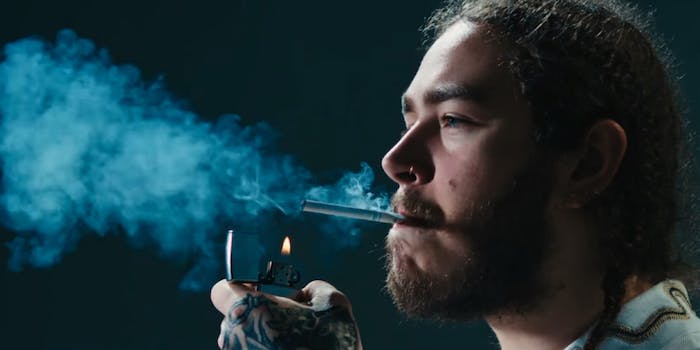 The plane landed safely, and Post Malone tweeted that he was OK.

On Tuesday morning, MTV Video Music Award winner Post Malone boarded a private plane from New Jersey’s Teterboro Airport to London, but it was forced to make an emergency landing after two tires blew out upon takeoff. The saga captivated the internet.

TMZ obtained audio from the flight, in which the pilot confirms the blowout, and that there are 16 people on board. The pilot reportedly circled above Massachusetts and Connecticut in an attempt to burn fuel before landing. A little before 3pm CT, the plane landed safely at Stewart International Airport in New Windsor, New York.

This Gulfstream IV departed TEB several hours ago, blowing 2 tires in the process. It was originally bound for Luton Airport near London. It is reported to have #PostMalone onboard. 1/2 pic.twitter.com/rBbgMVu5tE

At one point, more than 30,000 people watched a livestream as the “Rockstar” singer’s plane circled.

Post Malone also got a bizarre shoutout from Bret Michaels, who is apparently an expert on private jets.

Post Malone eventually tweeted that he was OK, and called out those who “wished death on me.”

i landed guys. thank you for your prayers. can't believe how many people wished death on me on this website. fuck you. but not today