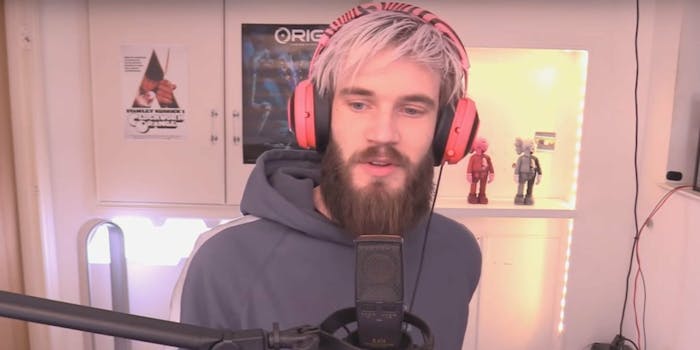 In his battle to remain the most popular YouTuber in the world, PewDiePie has received help from other social media stars, a YouTuber in India, and people who enjoy hacking into printers. Now, he’s even getting help, albeit indirectly, from YouTube itself.

In an announcement last week, YouTube said it had deleted 58 million videos and nearly 1.7 million channels in the third quarter of this year for repeatedly violating terms of service. The social media site said creators might see a “noticeable decrease” in their subscription numbers because all the spam accounts that had followed them would be banned.

That included subscribers to T-Series, the Indian music production company that was poised to pass PewDiePie in subscriptions this past summer. While at some points, T-Series was within a few hundred thousands subscribers of usurping PewDiePie as the most popular YouTube channel in the world, YouTube’s recent purge has given PewDiePie another big lead.

MrBeast, a big PewDiePie proponent who has bought billboards to convince people to subscribe to PewDiePie’s channel, noticed it last week.

By the end of Friday, T-Series had lost a total 53,000 subscribers, according to Social Blade. PewDiePie ended up gaining 145,000 on that same day.

As YouTube said in last week’s letter to its creators, “We regularly verify the legitimacy of accounts and actions on your YouTube channel. We’ve recently identified and fixed an issue that caused some spam not to be removed … We’ll be taking action and removing subscribers that were in fact spam from our systems. Removing spam from the platform helps ensure that YouTube remains a fair playing field for everyone and should result in higher confidence that you’re organically building a community of authentic fans.”

The gamer has had a controversial 2018, indirectly endorsing anti-Semitic channels, feuding with women, and sharing an insensitive meme.

As of this writing, PewDiePie, at 77.2 million subscribers, is about 1.4 million ahead of T-Series. At some points in this rivalry, it looked inevitable that T-Series would become No. 1. It’s just taking much longer than most people expected.